So I went ahead and did it. In an effort to promote the blog a little more I went ahead and created a Facebook page for it. If you have enjoyed reading the site please click over and like me on Facebook. Get updates on new posts and stay connected with all the various fun of a Stay-at-home-dad Academic.

I'd also like to use the page as a way to interact with readers in a way I can't always do here. I'd like to do some polls and give aways and basically have all that social media fun that I know the kids are into these days.

Thanks for reading and being a part of leading an interdisciplinary life. 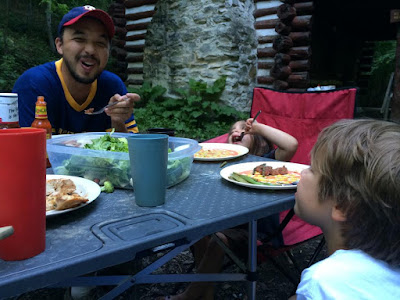 I thought I’d find them wet and miserable sheltering under a tree. Instead I found them tromping down the trail towards me singing, “An adventure is a wonderful thing!”

It had already been a tough week at the end of a tough month. The house we had been renting for that last three years was being sold.  The owners had good reason to sell, it wasn’t just trying to take advantage of a good market. They were willing to work with us as we looked for a place to move. Still, it meant moving again with two kids and an infant.

We finally got to closing and it seemed like the long days of packing and being a sub-par stay at home dad would be behind us. Finally, instead of having to work on securing the new house or packing up the old one, I’d be able to take the kids to the museum or the zoo or the playground or wherever else they’d expected to go this summer. Then it all started falling apart.

The discount mover we’d hired put us off and ended up not showing up. Not only that, but he lied to us long enough that we couldn’t find an alternative for that day. Between lost wages and paying for day care it was already an expensive day for us, now it was massively stressful because we didn’t know how or when we’d be able to move. T was ready to cry over the idea of putting Yo in care for a second day.

We ended up finding a mover at the last minute, someone who could fit us in on the Thursday before the Fourth of July weekend. It was only going to cost three times as much as we’d originally planned.  The movers were good enough that it somehow seemed like it was worth the cost. With that squared away it looked like everything would be fine.

So we headed off on our long planned camping weekend. It seemed like a little bit of a foolhardy thing to do a day after moving, but off we went. The move was behind us and it would be smooth sailing from now on.

We arrived at our rented rustic cabin on the Appalachian Trail. We unloaded the car and T headed to town for supplies. The kids and I set up camp, played music and waited. And waited. An hour after T was due back a truck pulled in to the site. A man got out and asked if I was Robert. “Your wife is broken down up on 81. She’s waiting for AAA” At least she was safe. Everything would fine. 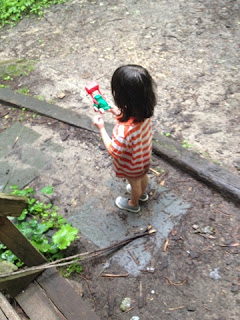 Two hours later as dusk fell an enormous tow truck pulled in to the too tiny dirt path near the cabin. I was shocked, all this for a flat?  Couldn’t they just fix the flat? Nope. Turns out our van didn’t have a spare when we bought it used. The tow truck driver let us know that it would be impossible to get new tire before Monday. It made sense, today was the Federal holiday, Saturday was the fourth, Sunday was Sunday. So we agreed to have the guy come back and tow us to town on Monday morning and resigned ourselves to being stranded.

Did we have enough food? Enough diapers? Enough water? I was a wreck on the inside. “Dad, are we going to roast marshmallows?” It’s all the kids had cared about all night as we waited for mommy. They had expressed concern for her well being, but underneath it was a concern that she wouldn’t be back with the marshmallows. It was late, T had taken the baby to bed, Lou had just peed all over herself because she was afraid of the potty in the woods, I wasn’t doing marshmallows. Instead I was jerk and sent everyone to bed.

The next day I woke up stressed. I slept in a good long time, until 9:45, but I woke up knowing there would be no coffee until Tuesday. Also, it was raining. Being stranded camping can be fine, but being stranded in the rain sucks. I was grumpy. I was exuding grumpiness. I was being a jerk. Lou had another pee accident.

When we camp we try our hand at free-range parenting. We let the kids explore the woods around the cabin and hike up the trail on their own. This morning we let them head up the south side of the trail, but after a while I decided to go look for them. It was dripping lightly, I took the baby with me to try to give T a break. Not one of us had rain gear on. So of course to started to pour. The first little one I found was one of our dogs who had followed the kids up the trail. She had clearly had enough and was headed back.  The baby seemed fine. She made no expression either way, just allowed herself to be carried through the warm rain.

I thought I’d find them wet and miserable sheltering under a tree. Instead I found them tromping down the trail towards me singing, “An adventure is a wonderful thing!” There it was. The weekend had turned around. My mood, my attitude, my jerky grumpiness melted away. The kids didn’t care. They didn’t fully understand the situation, they didn’t sense the peril that I did, and all of that is completely appropriate. It means T and I were doing pretty well as parents in that moment. It was also a reminder that the rain and the stress didn’t have to ruin our trip.

Here were my two soaking wet happy kids filling me in on their adventure, “We found a salamander. It was orange with yellow spots. We met a bunch of hikers and they didn’t ask why we were alone because when we saw them Lou told them that our daddy let us go on an adventure on our own so they never even had a chance to ask us!” They were happy, so I decided right then that I would be happy too.

We spent the rest of the day playing card games and napping and playing in the rain in the creek. The next day the kids (4 and 6) completed a 4.5 mile hike. I’m glad the kids were there to remind me what really makes a great trip. The stress was behind us. Lou had another pee accident. Everything would be fine. 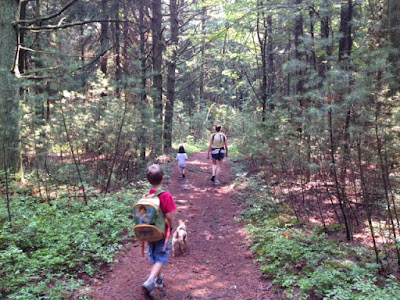