Mentored by My Trans Kids 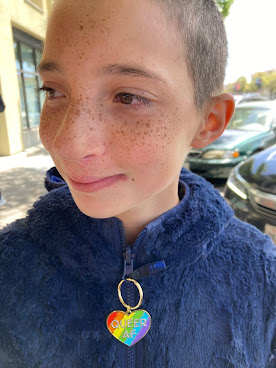 The other day someone referred to me as a trans-rights activist. I was struck by it because the label really doesn't fit. I can't be an activist, I don't do anything. Mostly, I'm an advocate for my kids. I write blog posts. I talk about them on podcasts. I tweet. A lot. I take little direct action other than signing petitions and voting. None of that makes me an activist. Being an activist means occasionally being a leader. I'm not a leader. I can't be a leader in the fight for transgender rights because I am not transgender. Leadership has to come from within. I'm not an activist, I'm an ally. Even then, my ally-ship starts with my kids and extends out from there. Being an ally, in the philosophy I follow, means being ready to do what is asked and amplifying the message chosen by the real leaders of the movement. It's being ready to respond when called upon to act, not to have a hand in deciding what those actions are. I do my best to listen to what transgender people say about themselves and to what they want me to say about them. Then I do my best to bring that message with me. That's what being an ally means to me.

My kids on the other hand, are leaders. Not on a large scale, but they are leaders. Each has taken up advocating for expanded all gender bathrooms at their schools. Lou did it with a petition. Ryu brought the issue to us and helped us communicate with the administration. My kids are happy to talk to anyone who will listen about who they are and what they want from society. I look forward to watching what they accomplish as they get older and start to find their audiences and avenues for engagement. Most of all, right now my kids are leaders and mentors to me. I look to them for guidance on what trans kids want. I look to them when wondering what I should say about a given issue. I use other sources as well, but the kids are right there with me everyday. So I listen to them.

Something they don't know, at least not as well as I do, is how much they've been mentoring me through how they live. I've never questioned my gender. Not in any real sense since I was very young, but I do have a memory it and I sometimes wonder who I'd be if I'd grown up now instead of then. I'll relate an anecdote that won't capture the whole of that feeling, but it's the best I can do 40+ years later. When I was around three years old, I had a very strong desire to be a glamorous woman in a ball gown like Vanna White. I didn't feel like I was the wrong gender. It wasn't something I thought about most of the time. But in very quiet moments, when I was alone, I would think about becoming a glamorous lady. I had one of those tool bench play set with the big, chunky, plastic screws and bolts. I hid the multi-colored hardware behind my bed and after I was tucked in, I would put them on the ends of my fingers to pretend I had long painted nails. 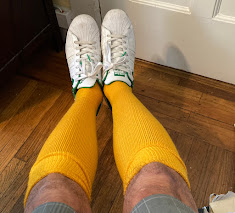 I don't know how long I carried on with that. Thinking back as an adult, I can see that I only did these things when I was assuredly alone because I knew it wasn't acceptable. For the rest of my childhood, I wanted to express myself and engage in activities coded as feminine. In gymnastics, I wanted to do floor routines and the uneven bars. Not because they were for girls, but because they seemed the most fun. I didn't want to wear "girls" clothes, but I did want to accessorize and modify my clothes in ways that only girls were allowed to do. I liked wearing long socks up to my knees. I kept wishing I could paint my nails until about third grade. Still, I always felt comfortable as a cis male. I just didn't want to be the kind of cis male I was allowed to be. 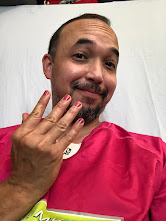 I don't know exactly what my kids feel about their gender. All I have are the clues and artifacts they can express to me using something as imperfect as language. I wonder if what I felt then is at all similar to what they feel now. I wonder who I'd be if I were growing up now, in an environment where I could wear what I want, how I want and not be told, no. My kids are mentors to me. They have no fear expressing themselves through clothes, activities or words. Watching them has nudged me to accept and indulge in some of the things I've always wanted, but was too afraid try. It's still hard, but I sometimes paint my nails. I wear long socks up my knees just for the feel of it and because I like how my calves look. If I could still grow hair, I'd probably grow it out long and have all kinds of fun with it like I did in high school, when I could get away with it just being a punk-grunge, skater thing.

So yeah, I'm not a trans-rights activist. I'm not leader. Very much the opposite. I'm a follower, and I'm letting my kids lead the way.