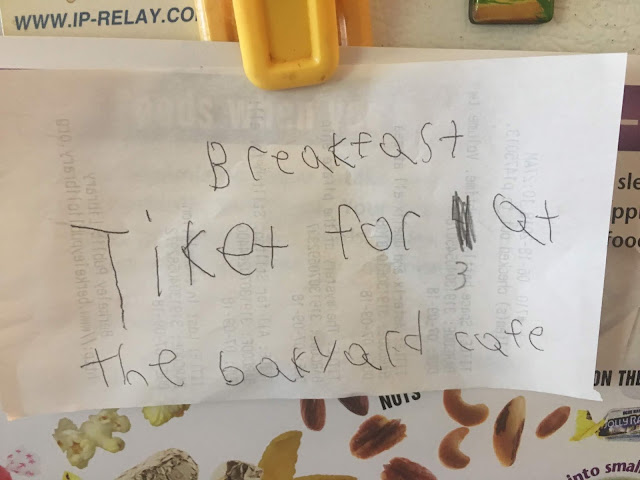 I don't do a lot of reviews. You can find a couple album reviews here, which I enjoyed but found I couldn't keep up with the volume of CDs being sent my way. But I felt compelled to write about a new spot in my neighborhood after I was presented with a coupon for a free brunch for three. There was no explicit quid pro quo in terms of trading the brunch for a review, but it was a unique dining experience and I believe it deserves a few inches of print.

The coupon was delivered in person by the proprietor, a young man (well, not really) who had admittedly just recently learned how to cook enough dishes to be able to present an actual menu. As you can see in the photo the coupon was originally for four people but was amended after a new policy allowing children under six to eat for free. The run up to our reservation was a little out of the ordinary. Due to scheduling conflicts, we were not able to get to the cafe for a few weeks after the coupon was delivered. During this time the owner approached me several times to ask if I would be coming in that weekend. I got the impression he was holding off the soft open of the place for a time when I could attend, which is sweet but also a little unnerving.

I'll cut to the chase here. The owner, who is also the head chef is very green and I think in a bit over his head. I get the sense he's never worked in a restaurant, and neither has his one staff member who I found out is also his sister. When I first arrived at 8:00am, the waitress insisted that I sit down and order right away and I was shown to a table that had been set up for us. The table was out on a sunny deck and included a name placard, which was a nice touch. 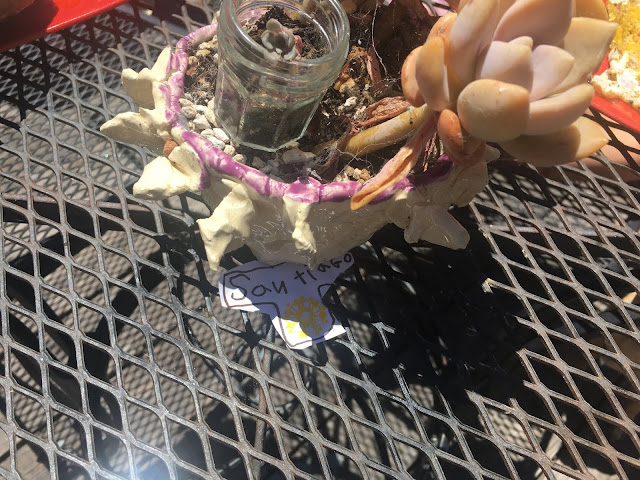 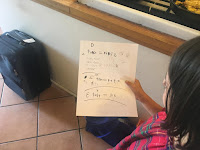 I took a look at the menu and placed my order. From the kitchen I could hear an argument between the waitress and the cook. They hadn't agreed on a shorthand for orders. He insisted that she write everything down completely, she said that would take too long since she wasn't really good at writing yet. Having worked in food service in both the front of the house and the back of the house I offered to help them settle on a system. That wasn't the end of the commotion in the back though as the cook saw my order included three items rather than two. "You can't order three things!" I heard him exclaim. Unable to help myself, I poked my head into the kitchen, "At a decent cafe I should be able to order what I want. Even if it's a little extra. But I don't think it should be too much to ask for eggs, meat and potatoes." 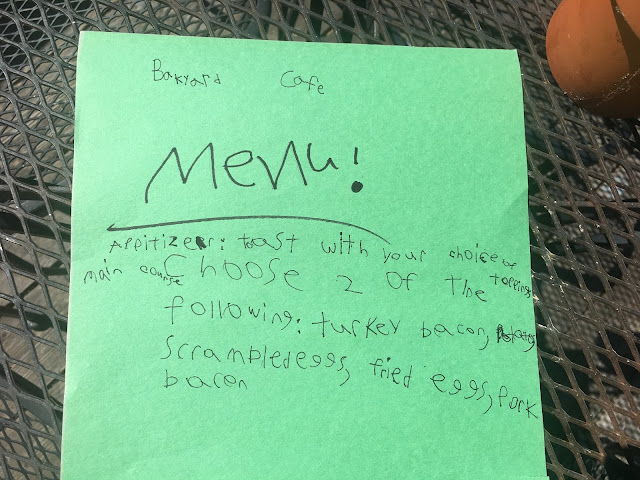 I didn't think I was being harsh so I didn't expect his anguished response of "Fine!" followed by a complete breakdown into tears. I felt bad so I tried to console him. We went back to his office, neatly appointed with bunk beds but no desk. (He's really all in on this venture.) "What's the matter?" I asked. "Does it all feel overwhelming having to cook so many different things?" He replied that if everyone ordered everything he'd have to do SO much cooking. I assured him that he could do it. "Besides," I added, "I'm patient. No one's rushing you through this." He returned to the kitchen where I noticed an older woman standing in a corner surveying the scene. When I say older, I don't mean old, just older than the children running the cafe. She seems to be some kind of consultant brought in to help with the soft launch. She noted the lack of food in the prep area. "I can't start before I have the orders. I won't know what to cook." said the young man. "OK, but you haven't done any prep at all. If you wait to start chopping potatoes until after the order is in it'll take you an hour to get anything out. That's why most restaurant staff show up hours before opening to prep. They're not sitting around watching cartoons waiting for orders." At this point I realized I wouldn't be eating for a while. Lucky for me I was able to take my coffee to a cozy lounge area that had wifi. 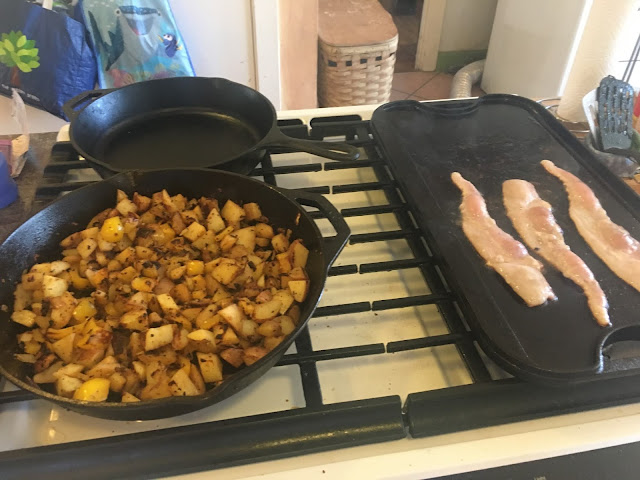 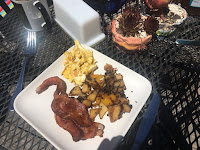 Sure enough, I wasn't served until around noon. When the food came out there was further confusion about plating, and the waitress didn't know who had ordered what. Her first plan was to have us all come to the kitchen to pick up our plates. After having intervened more than I'd wanted to already, I asked that my order be brought out to me. The food was good. Though the options were limited and I tried a bit of everything I have to say it all came out quite tasty. The general theme seems to be to use less seasoning and let the flavors of the fresh food speak for itself. The bacon, which came as either pork or turkey, was crisp. The the eggs were cooked perfectly; medium for the scrambled, over easy for the fried. I ended up dining with the consultant and found her company quite lovely. She provided French toast she had prepared herself as an opening day special. The cook, clearly a bit frazzled from his first day, sat at an a nearby table with the waitress and another young lady I didn't have a chance to meet but who I presume was another sibling of theirs.

My visit to the Backyard Cafe was unlike any experience I've had dining out. Parts of it were downright bizarre. But the food was good, and I suspect the service will improve as they get more experience. I'm definitely going to go back. 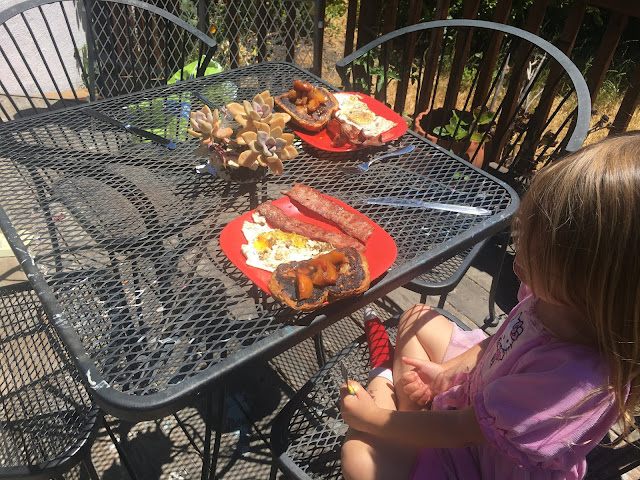