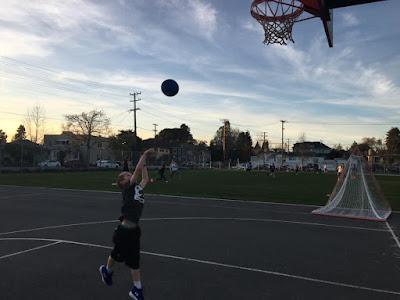 When I heard Sunday that Kobe Bryant had died, I was surprised. Of course I was, it's surprising when you hear that a person younger than yourself has suddenly died. Beyond that, I felt...nothing. This was also surprising. I was in the middle of helping coach at a youth rugby tournament so at first I chalked it up to that. During a break in the tournament I thought about it again. I'm not really into celebrity news outside of whatever it is people do when they're doing whatever it is they're famous for. So while I love say, Steph Curry as a Warrior, I don't know a ton about him off the court. So at that moment I chalked my lack of feelings on Kobe to my general apathy towards celebrity news in general. When the tournament was over and the kids and I were getting in the car, I reexamined my feelings and I still felt nothing. Why?

Why wasn't I upset?

I had been a huge Kobe fan between 2000 and 2003. If you know anything about Kobe, you know what happened in 2003. I was living in DC at the time and saving up for a sweet, crisp white Kobe Bryant jersey, which was a significant expense for a broke grad student. Then the news hit that Kobe had been accused of raping a woman in Colorado. After that, I always appreciated Kobe as a great basketball player, but I was no longer a fan.

In the years since his retirement Kobe had an impressive second act as a content creator. I never watched any of his work, not out of disdain or a sense of morality, but just because there's a lot of content out there to watch and it didn't interest me enough to seek it out.

When I mentioned his death to my wife, T was even less interested. Her thoughts were squarely with his victim. We agreed that it was a notable cultural event and that we were sad for everyone on board. They were all family and friend and co-worker and mentor to someone. There were kids, which is always sad. But that it was Kobe isn't any more sad than if it was anyone else.

It came up again over dinner. I don't remember how.

We have been deliberate in teaching our children about consent. We started with each of them from the time they were able to express a simple yes/no preference. We ask them if we can pick them up. We ask if we can hug or kiss them. We allow them the space to say, no. The goal of this with little kids is to teach them that they have bodily autonomy in their interpersonal relationships. They don't owe anyone physical affection, not even their closest relatives. We are not a physically distant family. We are very snuggly. My 10y/o son will still curl up on the couch with me to read or watch tv. My 8y/o still wants to be carried and tucked in. My 4y/o is basically glued to my wife every waking moment and asks me to lie down with her sometimes at bedtime. We're an affectionate crew, but always with consent.

Our conversation at dinner was the first time I remember us ever talking about consent in the context of sex or adult physical intimacy. I don't remember what prompted it, but one of the kids asked, "What's  wrong with Kobe Bryant?" I guess you don't really plan for these conversations, because we tried to skirt the issue, hoping they would drop it quickly. They didn't.

"He hurt at least one person very badly." (Silently hoping they drop it.)

"He touched a woman in ways she did not want be touched."

And there we were. My kids have known about the existence of sex for a long time. The older two were in the room when the youngest was born. They know where babies come from, though I don't think they know all the mechanics of how they get there. They know about sperm and egg and which party contributes each one. They understand most of the biological facts of procreation, but I don't know if we've ever really talked about sex outside of procreation. It was a little disorienting that Kobe Bryant's death had me charging into this discussion with my kids.

We covered everything you might want a young person entering adolescence to know about consent in an intimate relationship. We talked about peer pressure and coercion. Emphasized that they don't owe their bodies to anyone, no matter how nice the other person has been. We told them that there's no point where they can't say, "stop." It doesn't matter if you've been dating, kissing, or moved on to something more, you can always say, "stop" and expect your partner to stop. Using ourselves as examples, we showed that no matter how much you believe that the person in front of you is the only person for you, there is always someone else who will love you the way you deserve. They were a little surprised that T and I had dated more than a couple other people before we met, though they knew I had been married once before. The point was that the fear of losing someone shouldn't be the driver for doing things you don't want to do. Anyone who makes you feel that way is proving to you that there's someone better out there. The bottom line is that your body is yours. Anyone making you feel otherwise through word or deed is someone you should consider removing from your life. You don't need to acquiesce or compromise.

It was a good talk. One that I'm glad we were able to have and will have again. The fact is, no amount of teaching consent will prevent what happened to that 19 year old woman in Colorado. She did exactly what we told our kids to do. She said no. She tried to leave. She made her unwillingness known. She was raped anyway. That's not her fault. Understanding consent isn't magic armor that will keep you from all harm. I only hope that it can be a tool that keeps people from the less visible harms that come into too many relationships.

Kobe Bryant is dead and feel terrible for his family, his friends, and even his fans. They lost someone dear to them. For me, his legacy will be in continuing to try to protect my kids from people who commit similar, silent, deniable crimes against vulnerable partners, and to make sure my son grows up to be a better man.