The Love of a Good Man 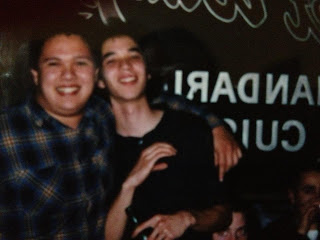 I should be grading, but I'm not. I was grading on Sunday when I learned that one of my closest friends had died. His wife called me to tell me, and ask that I help inform our friends.

Over the last week I've been asked to help with some small tasks for the family. Part of that has led me to have contact with many people in Afran's life who I either did not know, or did not know we had in common. The common refrain from all of them is that Affy was a bright, charming, witty, wonderful person. They're not wrong. He was also a man who liked to play the fool.

This was a guy who could have what, on the surface, appeared to be a very knowledgeable conversation about literature, when the truth was that he spent time memorizing the synopsis and analysis on the dust jackets of important works. He could have read the books. He would have understood them, and likely come up with insights and connections to other works that I would never have figured out. But he was busy playing Madden.

12. That’s not true. I can be quite dumb on certain subject matters, and astute on others. Depends."

What it usually depended on was whether he wanted to do the thing or not. If he didn't want to do it he'd pretend he didn't understand it. I once found him washing a cereal bowl by holding it under the faucet, filling it with soap, and then dumping it out and putting it in the drainer. No scrubbing, not even using two hands. After that I never asked him to do dishes again. Point, set , match, Affy. 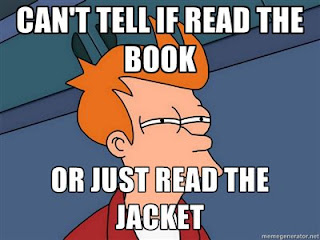 I loved Affy. And he loved me. It was a very real example of platonic love. Love that could be expressed openly and honestly and physically. One of the other things people have talked about recently is how much they'll miss his hugs. They were epic and comfortable hugs. Affy was a moderately large man, and when he hugged you knew you were being hugged, and you knew what was behind it. (I am happy that I can say this about many of my friends.)

The physical expression of love could also be wonderfully violent. Another random fact from Affy's Facebook note:

"8. The worst fist fights I had in my life were with my best friend Roberto. A drunken brawl outside Albany Bowl was, in my mind, glorious. That said, never doing that again. Ah, teenagers."

To me this was platonic love at it's best in young men. The desire to fight and wrestle, but with the ability to end it, bloodied and battered, with hugs and drinks and composing heroic poems about each other. Keep in mind this was several years prior to "Fight Club" coming into the wider public consciousness. Often we would have these fights over the course of a night out, and then go into work together the next morning full of silly pride.


I loved Affy. And he loved me. As I noted in one infamous speech, his wife thought he and I were a couple when she first met us. Affy and I shared things I haven't shared with most other friends, at least not to the same extent. At various, and occasionally overlapping, times we shared jobs, apartments, girls we'd made out with, enemies, a phone line and game consoles. I've never before or since gone halfsies on a video game system, but Affy and I had both a Sega Genesis and a Super Nintendo that we shared. We were so comfortable together that I'd sometimes wake up and find him perched at the foot of my bed playing Donkey Kong Country, even when I wasn't alone. It didn't phase him, and eventually my girlfriend got used to it.


I loved Affy. And he loved me. Our friendship was born out of a love of theater and poetry. We fancied ourselves romantics. I even dabbled in writing poetry because he inspired me. None of mine was very good, which I learned when we did a reading together for his poetry class his senior year of high school. They hated me. It was fine, because I'd done it with Affy, and he supported me.

One year, just before Christmas, we were out shopping together. We'd been up to Telegraph, and down to Fourth Street. We were at the Barnes and Noble on Shattuck Avenue when we decided to call it a day. We walked outside, and then Affy dashed back in asking me to wait. He came out with a Yale University edition annotated complete works of Shakespeare, which he presented to me as a gift. He had this amazing, self satisfied smile. The kind you get when you know you've done something great for someone else. I had 30 pound book and a long walk home. And that was Affy, equal parts thoughtful and careless.

Over the years our friendship grew from a foundation of literature and drinking and video games, to one of sharing marriage tips, and parenting tips, and drinking, and playing video games with our kids. Still, we knew we could see each other when we needed to cry. Or when we needed to be told we were full of shit. Or to go and seriously geek out because we knew we were going to sing our way through "Mama Mia" no matter what the rest of the people in the theater thought.

In the wake of Affy's death another friend of ours told us that he had a copy of a book of poetry that Affy had written. This was years ago, when we were all in our early twenties, and I had forgotten about both the book and its contents. But I remembered one poem, one that my cousin had liked, because it was about me. I remember not being able to even really think about the poem when it was written. I think it was too much for me at the time. I wasn't ready for it.

I've struggled with the idea of sharing it. I don't want to seem narcissistic. But I do have another point to make. Here is Affy's poem about me, written almost exactly twenty years ago, a poem about a younger, more perfect version of me.


The Importance of Being Santiago
by Afran Hirsch

The importance of being Santiago is not obvious
But essential to understand.
Though I do not know his heart,
I know his actions
And thus I have speculated on the nature of his being.

The importance of being Santiago is this:
The genius Santiago is is smart enough to know
That if one is not the victimizer, one is the victim
And yet understanding this
Is compassionate enough not to make victims
Of those he keeps company with....

The genius Santiago is hilarious enough
To always be the center of attention
But always destined to be under appreciated
For his genius is constant
So that his praise is not......

The genius Santiago knows
Better than anyone
That the world needs a good laugh
So he plays the jester
Even at the expense of his reputation
Because I believe he dreads a silent dreary existence
Even more than I do...

The genius of Santiago
Is resigned to his commision
Liked by all, loved by few,
Understood by even less....

Yet Santiago himself likes few things
Loves most, and understands it all...
Even in harshness, Santiago is compassionate enough
To mix jest with villainy, because he has looked at the sun
And not been blinded. And never aims to steal vision
With self-inflicted tears, from others...

Santiago knows life is a stage
And is the best player
This writer has ever known
And loved.

The importance of being Santiago
Is as important as the meaning of life.
One may never learn it
But seeking its meaning
Makes one a better person
Than had they left the dilemma unchallenged.
Thank you Santiago, for allowing me to travel
The path that is you
With the person that is you...

Love is a secret
Cloaked in obviousness
And one of the truer paths there
Is to know the importance of being Santiago.

I don't know much about poetry. I don't know if this poem is good as a piece of poetry, but it's important to me. Reading this for the first time in over fifteen years, it's important to me for reasons beyond it being a nice thing to have someone say. I have struggled throughout my life with believing I was worthy of being loved. So many people have loved me, and I've ruined so many relationships because I didn't believe them. I didn't see myself as being worthy of that kind of love and so I thought they must be lying. It's prevented me from loving people as much as I've wanted. It's prevented me from showing people how much I love them. Reading this poem, written to a 16 year old me, from an 18 year old friend helps me realize how wrong I've been. Even with all the crappy things about me. The stupid things I say. The stupid things I do, or stupidly fail to do. Even with all of that, I am worthy of this kind of love.

We all are. You are. The people in our lives are worthy of this, and we have to show it to them. We have to remember that how we feel is not unique. We share common insecurities. We have to get past them in order to love each other with our whole selves.

If Affy had known this he might still be with us. If he could have known for sure that he was worthy of love he might still be here. Of course it's infinitely more complicated than that. But those of us who are left behind have to try to find something in this we can use. We need something we can salvage so that it doesn't just seem totally devoid of reason.

I loved Affy. And he loved me. And now I finally totally believe it.

Thank you for the gift that has been your life Affy. I will miss you forever. I wish I could have helped you understand the things you've helped me to know. I am forever changed. 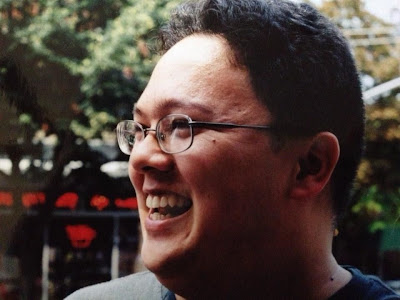