What We Mean when We Say "Sorry."


It seems there have been a lot of articles floating around the last year or so about whether and how much we should apologize or use the word "sorry." Some say we shouldn't force kids to apologize. Others claim to be able to teach us how to apologize correctly. There has also been renewed focus on how women sometimes use apologetic language in a way that is disempowering.

This got me to thinking about what an apology actually is. Sure, it's an expression of regret. It can be a way to show someone that you acknowledge that you've hurt them in some way. It can be an attempt at an easy out when you're trying to avoid the consequences of your actions. An apology can take many forms and have many shades of meaning to the speaker and the recipient.

But what is an apology really? What is the expectation that comes from an apology? Is there an implied promise inherent in the act of apologizing? I think that there is, and this is what I've been teaching my kids.

An apology is an illocutionary act, an utterance that has some force to it and is usually expected to lead to some sort of physical action. For example, the phrase "It's chilly in here" is often in fact a request or command that carries the expectation that someone will act to change the temperature of the room. Specifically, an apology is a commissive illocutionary act in that it binds the speaker to a course of action. In less flowery terms, it's a promise to change. It's a promise to take steps to avoid repeating whatever action led to the apology. 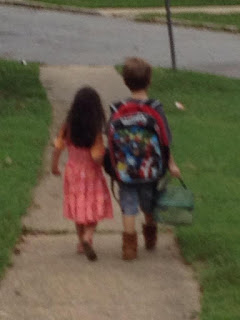 I wish I had come up with this all my own (and I'm sure there's another article out there somewhere that says proposes the same idea), but it came to me through a conversation with my son. I was frustrated with him, and with my kids as a whole, over what seemed to be increasingly empty apologies. During our discussion I asked him what he thinks he means by an apology. I asked him, if he finds himself apologizing for the same things again and again what is the apology for? Why should I care? He told me, "Dad, when I say sorry, what I mean is that I am going to try to change my behavior." Boom. He nailed it. It was the point I had been dancing around and trying to impart, but I hadn't been able to put it in those words.

Ever since then we've had a framework for what an apology is. We've had a touchstone to go back to when we need to decide whether an apology is warranted. As a result there aren't always apologies when I think there should be, and the ones that come may come slower than before, but I can live with that. The great thing is when I see the kids apologize to each other I know what they're doing. They are strengthening their relationship in small but meaningful ways. And it's working.

It also makes it easier for me to apologize to them, something that was hard for me to do for a long time. Now they know that when I tell them I'm sorry for losing my temper, or sorry for not hearing a request, that I am promising to do better for them in the future. It's helped them to feel better faster when I misstep. It's helped me to feel better about showing my kids that I can be vulnerable or wrong, which in turn has helped them do the same.

Understanding that words are actions opens up a greater understanding of how what we say affects the people around us. Framing an apology as a promise to change can help all of us, parents and kids, better understand what we're really saying when we say "I'm sorry."