Bless this Mess and Other Clichés 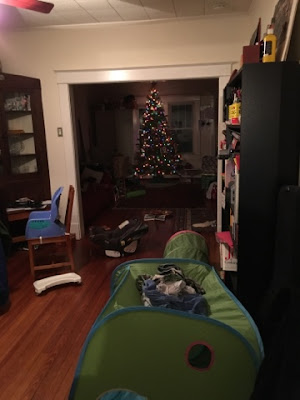 For years I lamented the fact that I was living in a home meant for three people, but with six people's stuff in it. That was seven years ago when I had two fewer kids and lived 3,000 miles from where I am now. My mother had only been gone for two years and I had become the steward of all her possessions. Hers, and my brother's things she'd been storing and saving along with things my step father had left when he left. I hated the clutter and the expense, I still do.

It wasn't always this way. I used to be a young man, and as is the case with many young men, the state of my home didn't matter much to me. I don't know when that changed. Maybe it was when I found myself living in my mother's house, which had become my house, and losing an entire room and a storage unit to other people's things. These were things I couldn't get rid of. Not because I had any particular attachment to all of them, but because I was legally bound to keep them until they could be gone over and disseminated according to the terms of my mother's will. Nothing changed when I left that house and moved into my own. The things, the things that were not mine but that I held out of a sense of duty, moved with me.

When I left my home town for new opportunities much of the stuff came with me. The rest was left in storage, that I pay for. I'm paying almost $200 a month for things that I'm keeping for posterity. Things that aren't really mine, but might be important to someone some day. Sometimes I think that the biggest curse was finding my mom's old report cards and journals while cleaning out my grandmother's basement. They were a treasure trove, a window into my adolescent mother's mind and heart. The result for me is that I've kept every print copy of everything she wrote. On top of that I kept her files, and notes, and interview tapes. I've also kept as much of my old school work, and my brother's as she deemed worthy of keeping.

It wasn't until a couple Christmases ago that I gave the last box of my brother's things to him to store. It was his old school work and arts and crafts. Things that should be kept by a parent, but were left to me until he graduated college. I could have relinquished them earlier, but I felt duty bound to hold them until he was "more stable." The result is that he's burdened with them in his apartment instead of having them in storage back home.

That was all before we had a third child and moved to a house that had at least two fewer rooms than the one we left. This one is ours though, in as much as a house with 29.5 years left on the mortgage can be anyone's. Now I again find myself lamenting the clutter. We bought the smallest, oldest house on our block. Our neighbors are wonderful people. Our kids all play together, and a few of them have hosted us on multiple occasions. We've never had any of them over. At first it was because we were still moving in. Now, though it's hard to admit, it's because I'm nervous about the fact that my dining room table is always covered in mail and my living room is nearly impassable with crap that my family has dumped on their way from the car to their rooms.

The things is, we're not materialistic. We're just the wrong combination of sentimental and lazy. We've been blessed with a world of hand me downs. We can't get rid of too small clothes because we still have small people. I never used to care about washer/dryer combos and could never understand why the commercials for them were so effusive. Now I feel like I'm running the damn things 24/7 and I would kill for a dish washer to go with them. I felt like a slacker until I realized how many of my neighbors have paid help for cleaning and yard work.I'm not worried about having a perfect home, I just don't want look like an episode of hoarders.

Because every so often I look at the ballet shoes in the middle of the living room, or the pots and pans in the sink, or the toys strewn about, and I realize who it is making this mess with me. I have a wife who loves me and supports us. I have three beautiful, maddening, brilliant children who deserve better than I give them. I have the son I always wanted, and who I hope turns out less damaged than myself. I have a little girl who seems impervious and fragile all at once. I have a baby who surprises me with how much she can do each day. Each one of them is infuriating and precious depending on the moment. I couldn't imagine my life without them.

As I fight against the tide of clutter and my own bitterness at feeling like I'm the only one who cares about a tidy home, I remember that the house itself is only as important as the people who inhabit it. I remember to let go of my desire to be able to walk from one end to the other without tripping or having a frozen pea stick to my foot. I remember why I cook each meal, and wash each new set of dishes. It's because I'm exactly where I want be, with exactly who I want to be with.

I don't claim to have a lot of wisdom to impart to you dear IDL readers. I don't have the answers. At best I hope you take something useful away from the thoughts I share here. But I'll say this, though you've no doubt heard it before: Take time every so often to look at your life and marvel at how far you've come. If you're reading this I'm confident that you've been on a journey from who you were to who you are, and you probably haven't given yourself enough credit for making it this far. So revel in what you've done. Embrace your mess. Love your family. Ignore the flaws and the rough edges of the people around you for just a moment and remember why you still have them near you. Love them all (or at least like them), and remember how lucky we all are to be here.