Little Boys and Nail Polish: This is Why I'm Moving Back to Berkeley 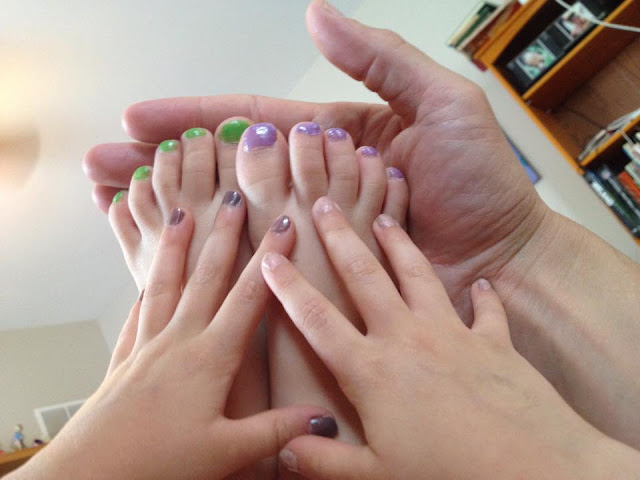 OK, there are actually a lot of reasons why I'm moving. It's where I'm from. It's where my oldest friends now live with their kids. It's where we have family.

I want that for my kids. It's been tough for us uber-liberal hippy types the last few years. Below is an email my wife sent to out previous day care. The goal isn't to trash the center so I am removing the identifying information. Her email was wonderfully written, and is a great example on how to approach these problems.

I'm writing to share some feedback about an experience at [Daycare] that is now years old. Since the events I'm sharing are long in the past, I don't expect that any specific immediate action needs to be taken, but since they have had a profound effect on my child I am sharing with you anyway.

Our son, nicknamed Buddy, attended [Daycare] full-time from 2011 through 2014. He generally had a wonderful time at [Daycare]: had positive experiences, created wonderful memories, and built lasting relationships with both his peers and his caregivers. We were especially grateful that some of those caregiver relationships were very long-standing, as he had one classroom teacher who happened to transition from his Toddler classroom into his Preschool classroom, so the two of them got to know each other very well.

Our son has always had a flair for self-expression, and during his preschool years he experimented with fashion. Like many young children, he enjoyed decorating himself with nail polish on his nails, barrettes in his hair, and sparkly things everywhere. We knew that this behavior being outside American gender norms, he might come in for some questioning or even bullying from his peers, but we were completely blindsided when we learned that some of this bullying came from his teachers. When I personally heard a teacher saying "Buddy, why are you wearing your sister's barrettes? Those don't belong to you," I made a point to take him shopping for HIS OWN barrettes and show them to that teacher, saying "These are Buddy's barrettes that he picked out for himself, so please don't tell him they don't belong to him. They do." Buddy picked out his own outfit to include a skirt one day (as he had worn to many non-school locations prior to that), and as I dropped him off I was very nearly in tears, afraid about what was going to happen that day. I had a quick conference with his most supportive teacher and asked her to please look out for him that day, and help him if he decided he'd rather change into jeans. He came home still wearing the skirt, but did report that some students and teachers reacted negatively, and he never ever chose to wear that kind of outfit again--not at school or anywhere else. I will never know exactly what was said to him that day, but I have to wonder, since this particular experiment of self-expression didn't phase out or anything... It stopped on a dime that day.

I am bringing this up now because I had a painful conversation with Buddy last night. He has current classmates who are very insistent about gender norms. Okay, these kids are six and seven years old, so we don't expect them to be particularly enlightened or supportive. But he told me that he doesn't like nail polish anymore (true--he has steadfastly refused all nail art for three years) because "Ms. S" asked him if he was a girl when he wore nail polish to preschool once. Ms. S was his teacher who worked with him for years at [Daycare]. He then proceeded to say to me, "She told me I can't have nail polish on my fingers and then she made me take off my shoes and socks to see if I had any on my toes. She made me feel embarrassed!" A [Daycare] teacher ordered a child to take off items of his clothing, in front of his peers, in order to shame him about a completely innocuous decoration.

"She made me feel embarrassed" is a devastatingly understated way for a seven-year-old to describe his own public humiliation, isn't it?

So I'm writing to you with this new information, not because I'm requesting any formal discipline or any specific actions at all--just because I feel that you need to know that this happened at the hands of your staff. The one request I'll make of you is that you respond to this information with a promise, to me and Buddy's father, not to let it happen again to any other child in [Daycare]'s care.
Thank you so much for always having been responsive to my concerns over the years. Despite this disappointing experience, we have a lot of love for all our friends at [Daycare]."

Later in the day we received this response from the day care director.

I'm so sorry to hear that this happen to our wonderful Buddy.  I'm just sick to find out that a caregiver here at [Daycare] left devastating effect on Buddy's life.  I'm glad you are bringing this to my attention because I this can now change what's happening in our facility because every child need to feel valued.  Please be reassured that I'm going address this matter with all my staff because children need to feel valued in all their choices. Again, thanks for giving us the opportunity to be a part of your children's lives and if  there is anything I can do to help just let me know and I will be there for you and your family."

The response helped, but as my wife said to me later, "I'm tired of having to fight these battles on his behalf."