We Bereave: Why this Warriors Championship Carries Personal Meaning 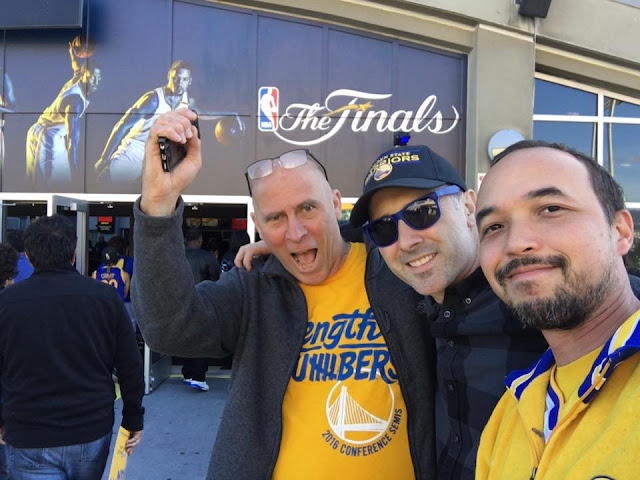 The Warriors just won another NBA championship, but you may have already heard about that. If you follow me on social media, you know I'm a big Warriors fan. I'm standing in my kitchen this morning in an old Chris Mullin jersey. I'm a little sleepy, and a little hung over, and very happy.

I recently did a guest spot on a podcast with my brother, "Uncle Nacho." He's launching a new weekly sports podcast called, Nacho Average Sports Podcast. We recorded it in the kitchen of the house we grew up in, a house we now own because our mother passed away ten years ago. During the conversation we talked about this recent run of success by the Dubs, and thought back to the days when they were terrible, and we could actually get tickets. 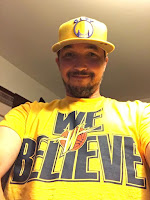 Back in those days the crowd cheered more for the prospect of a free chalupa than for a chance to win a game. After all, what's one win in a 60 loss season? A chalupa, given away when the Warriors scored 100 points or more, was like money in your pocket. Those were the days when our next door neighbor would offer us his season tickets and we'd have to seriously consider whether it was worth the $20. We went to a few games a year, mostly losses, and just had a good time hanging out with each other. It was usually some combination of me, my brother, my step dad, and my friend Daniel.

Mom got sick ten years ago. Her cancer was already advanced, and progressed quickly. She died on April 7th, 2007. Ten days later the men of the family took in a welcome distraction, going to watch the Warriors take on the Mavericks in the last home game of the season. Dallas had already secured the best record in the league and the number one seed in the playoffs. The Warriors were fighting for a chance at the postseason, where if they made it they'd have to face these same Mavericks. That night was the last home game for noted Warriors albatross Adonal Foyle. Foyle had become a symbol of everything wrong with the Warriors of that era. He had a huge contract coupled with performances that got him glued to the bench. But at this last game, he took a moment to acknowledge the fans and he got a standing ovation. It's one of the great things about Warriors fans, and sports fandom in general. A guy we couldn't wait to see leave town, got a standing ovation.

If you follow sports at all you know that this was the We Believe team. Over the next couple weeks they became the first team in NBA history to go into the playoffs as the number eight seed, and defeat the top seed in a seven game series. It was sublime. It was incredible. It caused the otherwise composed Mavericks star, Dirk Nowitzki to hurl a garbage can at a wall, causing a hole that the Warriors never repaired. Instead, they left it as a tribute to what that team accomplished. 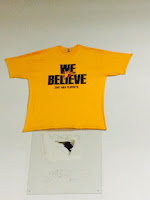 That playoff run, which ended in the second round, did something else for our family, and for me. It helped us cope with losing our mother. It gave us something to do together for a couple hours other than grieve. It gave me an opportunity to pull out of my role as executor, and all the legal maneuvering that entails. I was flying back and forth from D.C. to take care of things and that playoff run helped keep me connected to my home town and community. It was the early, cumbersome, expensive, days of texting. But we fired texts back and forth. Friends called me at 1:00am my time, scream out "WAAAAARRRRIOOOOOORRRSSS!!!!!" and hang up, just to share the moment. That team helped us through that time.

Look at the Warriors over the last three years. Steph Curry with his daughter on his lap throughout his 2015 championship press conferences. Draymond Green holding his sleeping infant as the confetti fell last night. Kevin Durant dancing with his mom on the floor, and then thanking her at his presser. Shaun Livingston talking about his daughter on the local postgame show. Steph's parents at every game. 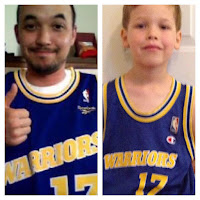 I've written about how sports was the one thing I shared with my otherwise absent father. Sports is how I found a common interest with my step dad. Sports was how I found time to hang out with my little brother. Now, ten years after mom died there we were in the kitchen talking about sports, and the Warriors, and the 2007 team. Last night my kids got to stay up later than usual, and see their first championship. Last year I wrote about how watching the Warriors lose last year with my son helped make me a better sport. I've learned so much about sportsmanship just by having to think about how I act in front of my kids. Now I got a chance to think about how to celebrate in front of them. We talked about why KD was hugging his opponents. We talked about how once the game ends, you respect your opponents. We shared a moment of joy, and a chance to learn something about the world.

Kevin Durant gave a shout out to his home area of Prince George's County, Maryland. It was big moment for my daughter, who spent the first five years of her life in PG, and has a deep and abiding love for Maryland. She's a big KD fan now. She insisted that we send this pic to KD on Twitter.

My mom never met these kids who are living in her house. She isn't here to see another generation sleeping in the room that once was mine, and later my brother's. We're here because she's gone. People sometimes say we're lucky to have inherited a house in Berkeley without really thinking through what that means. But here we are, and I think about her every day. I think about her as I cook in her kitchen and sleep each night in her room. I think of her as I watch Matt Barnes, the prodigal son and only current Warriors player from that 2007 We Believe team, win a championship a decade after the Warriors helped us through the worst month of my life.

People ask why we watch. People ask what sports fandom is about. How can we care so much about something we're not involved in? It's because fandom isn't about wins and losses. It's not about civic pride, though it can be at times. Fandom is about connection. It's about getting on a crowded train and knowing you're at home with all the other fans. It's about welcoming visiting fans and talking about the game with them, showing them the best of our city. It's about having touchstones that help you mark the occasions in your life, or being able to say, "I was there."

UPDATE: I met Matt Barnes, and he signed my We Believe t-shirt. It was a cool moment. 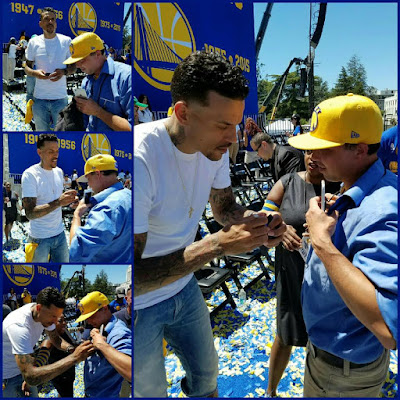