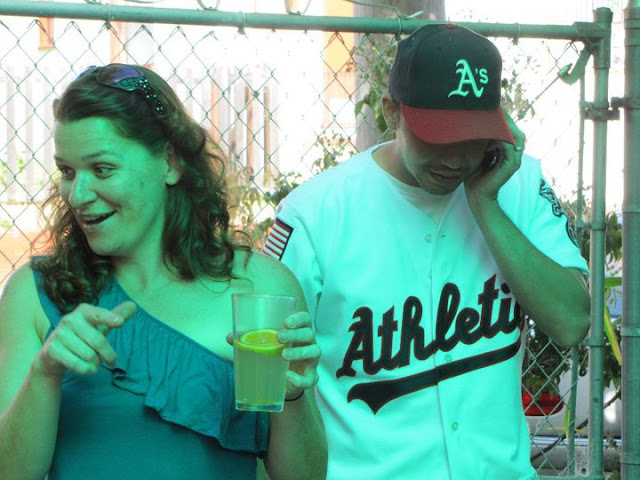 I'm usually a big Fourth of July guy. I love the weird baseball uniforms, the BBQs, and shows of patriotism. I've long been the guy who organizes a cook out and dons red, white and blue and runs around with sparklers. I was always a patriot, even when it was unpopular growing up in the Reagan 80s in Berkeley. In high school I was a guest on a local radio show about patriotism. I was chosen as the "pro" side. I was pretty well savaged by the callers. Still, through Reagan and Bush I and Bush II my love of country never wavered. I looked at all the good we'd done in the world, while openly examining and admitting our many many many faults. I always stood for the anthem. I was proud of my family's military service. I saw progress.

This year is different. I'm not feeling it.

Last night we went to the A's game for the fireworks. I usually wear my Eric Chavez era red, white and blue A's jersey and cap. This year I couldn't do it. I wore black. When they performed God Bless America I didn't stand. I couldn't. Instead, I raised a fist. I was relieved that no on seemed to notice. Today, instead of my usual garb, I'm rocking a Colin Kaepernick jersey.

It's a complex time for me. I'm fighting myself every day. I know that our current administration is an abomination. The president and the jellyfish supporting him in congress are doing everything they can to make our greatest fears from the 1980s into a reality. So I'm disenchanted. I can't muster the energy to celebrate this year as I watch my country get stripped and sold for parts. The administration is compiling a list of dissidents under the guise of investigating voter fraud. My fellow Japanese-Americans see the specter of internment in each new executive order. Every other day I consider whether I'll go quietly to the camps, or refuse to be taken alive. 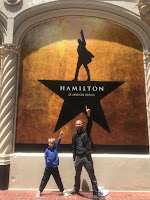 There's nothing original in noting that the most popular musical and cultural phenomenon in the country right now is a musical about revolution. I had been mostly ignoring Hamilton because I didn't think I'd ever have a chance to see it. I didn't want to torture myself by getting into a show that was inaccessible to me. The times I listened to parts of it I couldn't distinguish the characters enough to get a feel for it. Then a generous friend secured tickets, first for my wife, and then last week for Buddy and I. You can easily find reviews that will tell you all the wonderful aspects of the show. It's everything you've heard, and more. What hit me, and honestly scared me, is that it all sounded like a good idea. I could see the parallels between the political atmosphere then and now. It makes me intensely uncomfortable. When Hamilton exclaims, "Give me a position, show me where the ammunition is" I thought "YES!" and then was immediately ashamed because I wasn't thinking about history.

I'm a Civil War history buff. The very idea of secession used to get my hackles up. I despise the Confederate Battle Flag and I have long considered those who fly to be seditionists. I seethed when right wing nuts talked about rebellion under Obama's presidency. I never, ever thought I'd have similar thoughts. I still don't. I don't want to see armed conflict between citizens and the government. I wouldn't advocate for secession or revolution. But for the first time I can envision a conflict being forced upon us. Even in the darkest days of W I always felt like we'd be able to fix things over time. I don't feel that way now. I worry that we are at the brink of the end of the United States that has been. Whatever we become, whatever happens next feels like it's going to be something bigger than any change we've seen during my lifetime. Godwin's law not withstanding, I keep wondering if this is what it felt like to live in Germany in the 1930s. You keep trying to live the same life. You keep thinking that everything will be OK and will right itself. You keep telling everyone that "they won't possibly let this continue" without a real clear idea of who "they" are supposed to be.

Remember sitting in history, thinking “If I was alive then, I would’ve…”