Great job everyone! Can't wait to see all of you soon! Train safe! ~Raul
Posted by SF Parkour on Monday, January 15, 2018

OK, I bet there's like a million blog posts with the same title. Whatevs, dude. I'm going with it.

Hi! It's been a while. I basically went into a bunker at the start of last semester, and haven't emerged until recently. I spent 60 hours-a-week at work trying to make things work as the lone member of an academic department. It didn't work. I'm no longer in traditional academia, which I'm sure I'll write about at some point, but for now I've taken about a month to reacquaint myself with my family. I'm also getting to see some of the friends I allegedly moved back to California to hang out with.

One of those friends is an actual good parent who, unlike me, has made time to sign her kid up for actual activities. She's an awesome mom, I look up to her. Our sons are six-weeks apart in age and we've been friends since right before her and T were preggo-buddies. Knowing I had more free time on my hands, she reached out about a beginners parkour class hosted, by SF Parkour. Her son had been wanting to try it for ages, but it always conflicted with football. (See, she like, does stuff for her kid other than tell them to play in the yard while doing seemingly endless piles of laundry. I mean, I'm sure she does piles of laundry, she just is able to do other stuff too. I'm not.) Bonus: it was being held at U.C. Berkeley, just a short walk from home.

I have always been surprisingly athletic. This isn't to say I've ever been a star at anything, but I'm not much to look at physically so the athletic success I've had has generally been surprising to almost everyone. Over these early years of parenthood I have come to realize that my kids do not share this trait. Not that I've given up on them, or that they shouldn't continue to pursue all manner of athletic pursuits, it's just that moving doesn't come naturally to them. Of course, I blame myself for encouraging their more sedentary/nerdy pursuits. It's a lot easier to clean the kitchen when one is reading and the other is working on endless art projects than it is from a playground. And it's not that I haven't tried. There have been plenty of times when my little ones have gone tearing through the house wrestling and screaming, only to see them sit quietly in the tunnels of the play structure, refusing to move once we arrived at the park. Whatever the reasons, my kids have two left feet, two left hands, and possibly two left eyes. But I'd always wanted to try parkour and I wanted my kids to hang out with my friend and her athletic prodigy of a kid. (I'll add, her kid is also really smart and very good natured. He's basically perfect.) 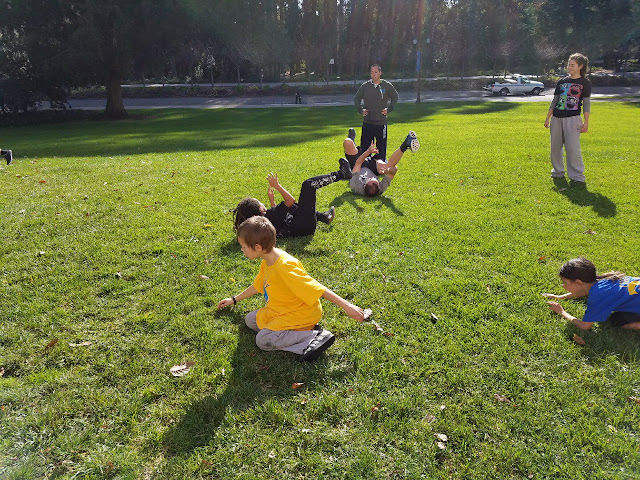 The class wasn't aimed at kids, but it wasn't not for kids. It was open to literally anyone and that's who seemed to show up. The age and ability range was significant and the instructors were game to teach all of them. I can't say enough about how cool these instructors were. They were patient and generous with every single person who attended. The class started with a warm up and then moved into teaching some basic parkour moves. "HARDCORE PARKOUR!" my kids yelled, a phrase they had picked up from The Office clip I'd shown them the night before. "HARDCORE PARKOUR!" exclaimed while failing to execute a single summersault that didn't involve slamming head-first into the ground. "HARDCORE PARKOUR!" yelled Lou, well after she had abandoned the activity in favor of sitting in the shade and eating a Cliff Bar. Gotta love 'em.

The truth is, it didn't matter if the kids were any good at parkour. In fact, we spent some time before and during emphasizing that they shouldn't expect to be good at it yet. It was their first attempt, learning takes time and repetition. By the end of the day Buddy was doing pretty well vaulting over the wall and rolling down the hill. The instructors, with some help from dad, convinced him to embrace the process of learning instead of the result of his initial attempts. Once he realized he could be successful at the process of learning, executing discrete tasks and then combining them into a fluid move he improved rapidly. (He also stopped comparing himself to other students, which is something I emphasize with him, and my own classes.) 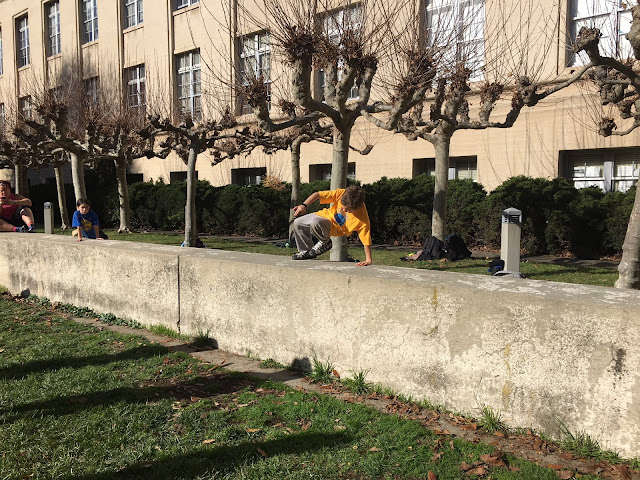 As we all walked back to our house for PB&J and an extended play date, both of the older kids said they enjoyed the class and wanted to do it again. I also had a great time learning the basics, though I am sore in ways I am not familiar with. So if you're looking for a fun day with the family, or on your own, I recommend looking up SF Parkour. They also mentioned other parkour meet up groups in the East Bay and around Nor-Cal, but I don't remember them all. SFPK is a good start, and I'm sure they can point you towards groups in your area.