Recipe Post: Bacon Explosion and a Decade as "The Bacon Guy." 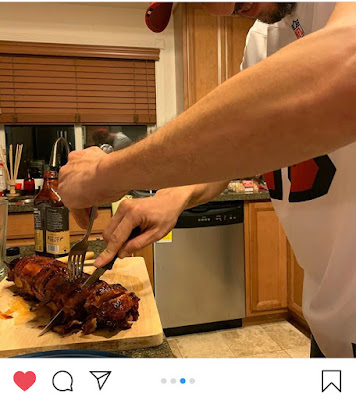 I read or heard once that every crew has "the ___ guy." I guess maybe this applies to all male or maybe mixed gender crews. I'll admit, I don't know as much about all female crews but I imagine there's a similar concept at play. There's the "fedora guy," the "indecisive guy," the "quiet guy," etc. Of course, these are just examples of types, your crew may not have a quiet guy or whatever. During my youth, I was the "funny guy." Then about 10 years ago, I somehow became the "bacon guy." I'm not sure how it happened but I'm pretty sure it had something to do with the Bacon Explosion. The thing is, I don't remember if I came the Bacon Guy because of the recipe or if I was sent the recipe because I was the bacon guy. What I do know is that for years my friends would send me bacon memes and bacon photos and bacon recipes on social media. They would also give me bacon ephemera on holidays or just randomly. Bacon chocolate, bacon mints, bacon body wash, I got it all. It was fun, and it was all somehow tied to the Bacon Explosion.

December is full of holidays. I learned about a ton of them at my kids' holiday show at our local theme park. One of them is today, December 30th, which is National Bacon Day, another in the long line of National Days. (Seriously, it seems like National Bike to Work Day happens 4-6 times/year). You may be thinking, "He's writing about another National -insert food- holiday? Didn't he just do this?" Well, yes. It's fun and I need a break from the more serious stuff so bear with me, OK? Thanks. After all, if you remember my old SAHD Kitchen posts, cooking posts aren't off brand for me. I promise I'll have something more uh...meaty coming up next month. (Get it? Meaty? Get it?) Besides, I couldn't pass up a chance to write about bacon. I'm the Bacon Guy.

The Bacon Explosion was invented by BBQ Addicts back in 2008. I don't remember how it came to mu attention. I remember someone sending it to me and saying I should give it a try. Or maybe I heard about it on NPR. Who knows. What is clear is that I had to try it.

I made my first Bacon Explosion for the 2009 Super Bowl. It was clear right away that I'd have to improvise some things as I did not have a smoker, which is called for in the original recipe, and that's what I want to focus on for you here today. If you just wanted to make a bacon explosion, you could find the steps on the BBQ Addicts site. I want to offer you something else. After making these in my kitchen for ten years, I would like to share some tweaks to the original recipe that work for the typical home cook. So I'll document my latest attempt and let you know where my approach differs from the original recipe. 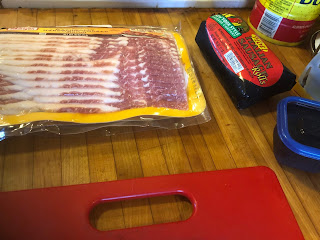 Baking sheet, deep is better
Rack for over the baking sheet.

Step 1: Lay down a bacon weave. The original recipe says 5x5 for the weave. I say just make a square and don't worry about how many slices that is. 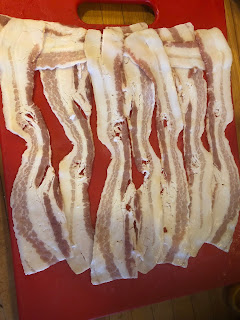 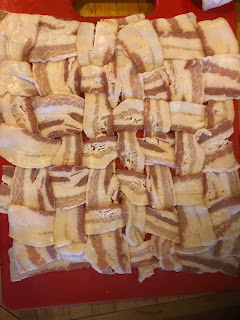 The first difference between my approach and the original is in the bacon. The original calls for only thick cut bacon. What I've found is that it's better if you use regular thin bacon for the outer weave. Because you slow cook it, the inside of the weave doesn't cook the same way you might be used to for bacon. It's cooked, but it's more like ham than bacon and thicker bacon cooks even less evenly on the inside of the weave. So I prefer thin bacon for the weave. It gives a better texture. 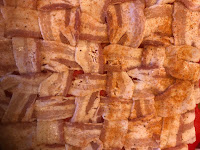 Step 2: Dust your weave with some of your rub.

A sweeter rub is nice as it counter points the saltiness of the bacon. If you don't have rub, you can make your own or use other spices. In a pinch, I've used Old Bay or a mix of paprika, chili powder or other things. I've never tried brown sugar, but I bet that would be good too. 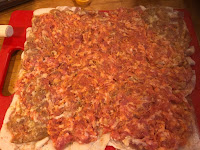 This is another place where I deviate from the original. BBQ Addicts wants two pounds of sausage. For me, that much sausage causes the sausage to dominate the dish and takes away from the bacon. This is a bacon recipe. We want bacon to be the primary experience, so I only use one pound of sausage. I used to buy cased sausage and cut the casing off. Lately I've been buying uncased sausage. You can use whatever you like. I like using Italian, but if you want more of a breakfast taste you could use breakfast sausage. Spread the sausage all the way out to the edges. 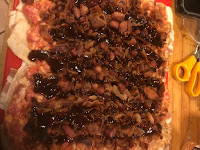 Step 4: This isn't really step 4, it's more of a concurrent step if you can swing it. You want to cook up the rest of your pound-plus of bacon. Cook it up how you like it. I like mine crispy. Take all that yummy bacon and crumble a layer over your sausage. Remember to only snack on bacon from the plate. Once you put it on the sausage, it's on raw pork and you can't eat it until after it's all cooked. Next, drizzle your favorite BBQ sauce over the crumbled bacon layer. 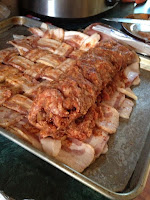 Step 5: From the top, carefully but firmly roll the sausage layer towards you, rolling up the crumbled bacon in the sausage. This will give you a pinwheel of bacon and sausage. Make sure you roll it tight, take your time.

Step 6: Roll the sausage tube back up in the weave. Here, you don't want much overlap for the reason I mentioned above. Any bacon in the weave that isn't expose to the outside won't cook up the way you want. You just want enough overlap to keep it closed up at the seam. If you end up with an extra apron, cut it off and enjoy your bonus bacon snack. BBQ Addicts says to do another layer of rubin the outside of the weave, which is good, but I usually forget and I don't think it changes all that much.


Now you're ready to get cooking. The original wants you to put it in a smoker at 225 for about 2 and a half hours. I didn't have a smoker so I had to use my oven. I still set it to 225. In order to get some air flow and to allow the grease to drip off, you want to put it on a rack over a deep baking sheet. Bake it for an hour, then flip it over. After the second hour, check it for an internal temperature of at least 160. I usually need to flip it again and give it another 30-40 minutes. Once you get to 160 you're ready for the last step.

The original recipe wants you to get to an internal temp of 165. That's where they end the cooking. For me, the weave is still not cooked to where I like it at this point. So when I get to 160, I turn the oven to broil. If you have two broil settings you can do about 5 minutes on each side on low broil. If you only have a high broil setting then go for 2 minutes on each side or until the outer layer looks how you want it.

Last, baste the whole thing in BBQ sauce and you're ready to serve. Go ahead and treat yourself to the crispy end, it's the best slice. 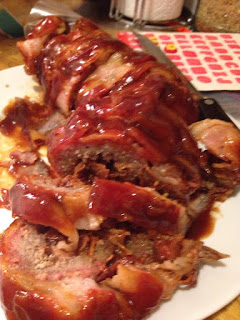 So there it is, a decade of tweaking and improving on the ultimate BBQ-bacon recipe. I've brought these to every super bowl party I've attended in the last ten years. My cousin used to insist that I bring one to Thanksgiving each year. It's made me a hit at workplace parties. I'm the Bacon Guy.

I've also experimented with it in various ways (pics and serving suggestions below). I made little ones that I called bacon grenades. I made on with turkey bacon and chicken sausage for my wife who doesn't eat mammals. I tried a cheeseburger explosion with ground beef and cheese in the middle, but at 225 the cheese didn't melt right and I hadn't thought of adding the broiler step. I want to revisit that one.

However you make it, I hope you enjoy it.

You can make any day a holiday, give your office or classroom something to celebrate, or just enjoy yourself by checking out every National Day at the National Today website.