My Child is Special Needs, Until She's Not 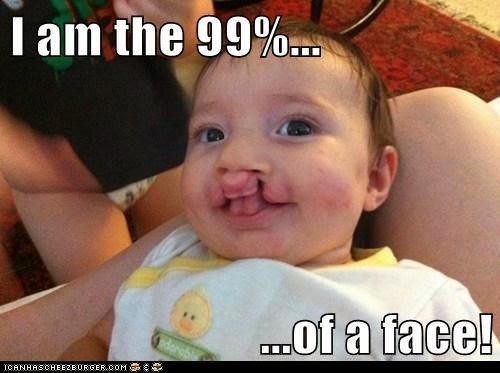 I sometimes feel guilty when I say that my child has special needs because I know that it's a cheat. Sort of.

The thing is, I know her needs will end, where as for so many parents of special needs children it will never end.

Lou was born with a surprise complete bilateral cleft lip and palate. In hindsight it was actually perfectly clear on the sonogram, if you knew what to look for, which my wife and I did not. We would have expected our midwife to catch it, but since she later lost her license after several instances of gross malpractice it's no surprise now that she missed it also. But it was a surprise at the time. Sort of. (UPDATE: T tells me the radiology person should have seen it, not the midwife.)

My uncle had been born with a cleft lip and palate, but only on one side. This was in the 1950s, in Pakistan, where my grandfather was working for some kind of NGO. The story that was passed down to me was that by the age of three my uncle was still just babbling. Doctors told my grandmother that because of the cleft my uncle was retarded (that's what they called in 1959) and would never learn to speak. It turns out he was just speaking a very obscure dialect of Urdu, which he learned from spending 10 hours a day with his nanny. While T was pregnant with Lou I used to joke that she was totally going to have a cleft. Then she did.

Lou was born at home (with a different midwife, not the one who lost her license) so we had no idea what to do with her. This was the midwife's 700th birth and it just so happens that the instance of clefting is about 1/700. She didn't know what to do either. Within two hours were at our pediatrician's office, and an hour after that we were the cleft clinic open house at our local hospital. We were lucky that Lou had been born on cleft clinic day. Right there we met the entire team that would be responsible for her care for the next 18 years. everyone who came in with her chart (case manager, surgeon, audiologist, speech pathologist, ENT, geneticist) did a double take when they read that T had delivered three hours prior and was sitting there asking questions about Lou's future. (T is a super hero). All the specialists kept using the phrase "severe facial deformity." That wasn't fun, especially since she was so cute. The worst part of the trip was learning that Lou would not be able to nurse. The best part was learning that early and being given the special feeders she'd need.

So we took her home and immediately nick named her "Zoidberg" because that is how we cope with stress. 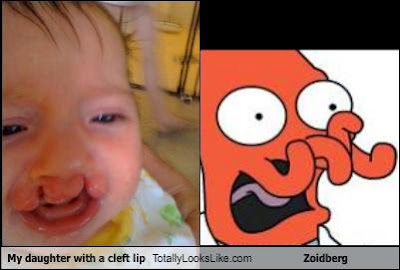 People hear about her cleft and the first comment they usually offer, "Oh, well that's no big deal. They can fix that now." And they're right. Sort of.

The clefting is a relatively easy fix, especially the way they used to do it in the 1950s, all at once and right away. I assume they dealt with the further issues later, but I don't really know. No one in my family seems to remember. But right, she'll have totally normal function by the time she's 20. She'll always have a scar and she'll never have cupid's bow, and part of me will always wish she'd been a boy, because boys have an easier time looking a little rugged. Peyton Manning had a cleft, he's not considered ugly and I bet you didn't even notice. (You can hear it in his speech if you know what to look for).  But she'll be fine.

To get to that point though she will need three or four surgeries on top of the two she's already had. All told it's a lip closure, palate closure, nose job, jaw realignment, tooth insertion or removal (depending on what her teeth do), and a possible palate lengthening (to help produce speech). But after all that she'll be fine. If it seems like a lot (or even if it doesn't) it's a lot. Seeing a three month old baby come out of anesthesia with a huge scar on her face is not fun. Having to do it again seven months later isn't fun.

The surgeries made feeding complicated. Well, more complicated. That T was hell bent on only giving Lou breast milk for the first year was also complicated. That part of it meant T was pumping eleven times a day at first, for 40 minutes or more each time. She later reduced that to about eight times a day. Still, that meant that not only did we have to plan every outing anywhere at any time around T's ability to pump, it also meant that even when she was at home she wasn't available half the time. This second fact was especially hard on our two year old son. That much pumping was also draining for T, both physically and emotionally. She happily nursed our oldest for two years. Spending twelve months as a dairy cow was not as rewarding.

I know how this reads to people who have experience with special needs children, "Being inconvenient isn't the same as a really having special needs." You're right. But there's more. Lou qualifies for and requires special services. She's had free in home speech therapy through the county. She'll have IEP and qualify for early entry services in public pre-K. This means dealing with the admin side of having a special needs child. Lots of meetings, and follow up meetings. She faces scrutiny in public, from honest comments from other kids, to ignorant comments from adults, to teasing on the playground. Luckily all of these have been rare so far, but I worry about her going to school. Still, by the time she's 20 she'll be totally "normal."

That's why it feels like a cheat. That's why I feel guilty saying that my daughter has special needs. Because even though that's true right now, it's going to end, and the end is going to be fine. Meanwhile I know people who have kids that really have special needs. Kids who have had open heart surgeries within minutes of birth. Kids who eat through tubes. Kids who have cognitive or neurological issues that may not ever go away. Unlike some parents I won't have life long fears for her. Her situation isn't life threatening. With a series of painful and invasive medical interventions she'll grow out of it. So whenever I think about the things Lou needs that my other kids don't, whenever I schedule a determination meeting or register for support services I feel a little guilty. I feel like there should be another category for people like us, for people who have short term needs. I wish there were a category that didn't make me feel like I was disrespecting the struggles of other parents who don't have a light at the end of the tunnel.