Why I Went to Ferguson 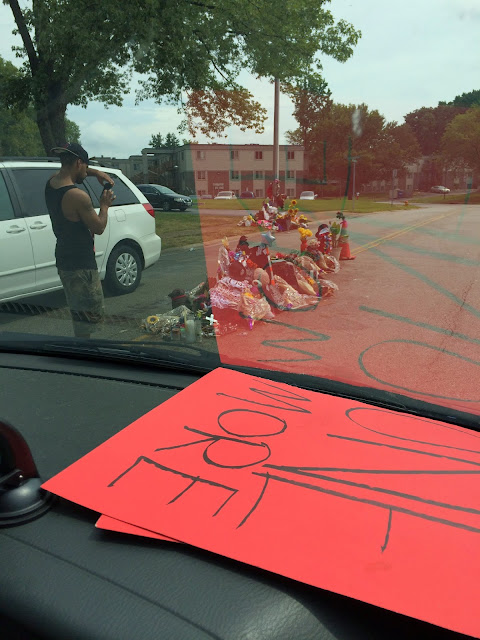 It's now the end of March, 2015 and the DOJ has released their reports on the shooting of Michael Brown and their investigation of the Ferguson Police Department. The reports are mixed if you're a proponent of the "Black Lives Matter" movement. I'll admit, I haven't read the reports themselves, and I probably won't. I have read about them and the conclusions seem to be that while the department was rife with racism and rights violations, the shooting of Michael Brown was likely not the injustice we believed it was. Whether the DOJ report sways you or not is up to you. I personally believe in the DOJ investigation, in part because I supported the call for them to investigate and I feel like I have to stand by the result. That may seem weird given that I did not stand by the findings of the grand jury who examined the case. But I have more faith in a Federal investigation into this kind of crime. I also still believe that Darren Wilson is guilty of something, even if I don't know what that is, and I firmly believe that there could have been, and should have been options available to him in subduing a suspect under these circumstances. Though our understanding of the facts in the Brown case may have changed, that doesn't change the importance of the "Black Lives Matter" movement, which has become about more than just Michael Brown.

Even with that exhaustive introduction, I'm not actually here today to discuss the merits of the DOJ reports or the case itself. I know that while I have outrage and consternation, I don't have any insight into that aspect of the case. Instead I'd like to go back to August of 2014, when I went to Ferguson.

I'll be honest, even after the decision was made I didn't know why I was going.  Well, I knew why I was going. I was going because my wife had decided that the only thing she wanted for her birthday was for us to go to Ferguson, to march, as a family. In a way I understood. We had been sitting watching things unfold with a feeling of total helplessness. Posting on Facebook to an audience that was largely already on our side wasn't very satisfying. We wanted to help, but I didn't know what going to Ferguson would accomplish. There were already people there, what good, what difference, would the four of us make? But I am notoriously bad at giving gifts, so when my wife proposed this trip I agreed without hesitation. I wish I could say I made the decision for a more noble reason, but initially it was really just so I could give my wife something she really wanted for her birthday. So we decided to make the seventeen hour drive to Ferguson on a Friday night (so the kids could sleep the whole way and feel less of an impact) and come back Sunday night.

In the days leading up to the trip, and on the drive we talked about our goals for being there. My biggest fear was that we would end up as "Disaster Tourists." My wife's feeling was that she wanted to go for several reasons. She wanted to show that non-Black people care about these issues. She wanted to be a white face in the crowd in order to show that this is an American issue, not just an African American issue. She didn't mean that in the tone deaf manner of the misguided "All Lives Matter" people. She wanted to show that people of different races, and from different places, care about what's happening in a small suburb of St. Louis that most of us had never heard of before. She also wanted to show the kids that activism is important. We had been talking with them about Ferguson for a couple weeks at that point, and she wanted them to see that you can get involved in world events, rather than just sitting back and watching them unfold. I agreed with these reasons, but I was still uneasy.

I didn't actually do any marching in Ferguson. I dropped off my wife and daughter at the march and went off to secure our motel and get some sleep, as I'd done the bulk of the over night driving. Later on I drove to pick them up at the same McDonald's where police had harassed journalists in the early days of the protests. Driving down W. Florissant Ave. past the burned out gas station and the boarded up BBQ place that had a Clerks-like "We're open" spray painted on the outside was surreal. The thing I noticed though, was that at that time Ferguson had the most polite drivers and pedestrians I'd ever seen. Whatever was happening in that community had either created, or maintained, incredible civility towards each other. The McDonald's parking lot was packed, but no one was frustrated. People waved other drivers ahead, merged efficiently, and allowed pedestrians to pass. The pedestrians checked and made eye contact and acknowledged the drivers. It was astounding. The sense of community was palpable. 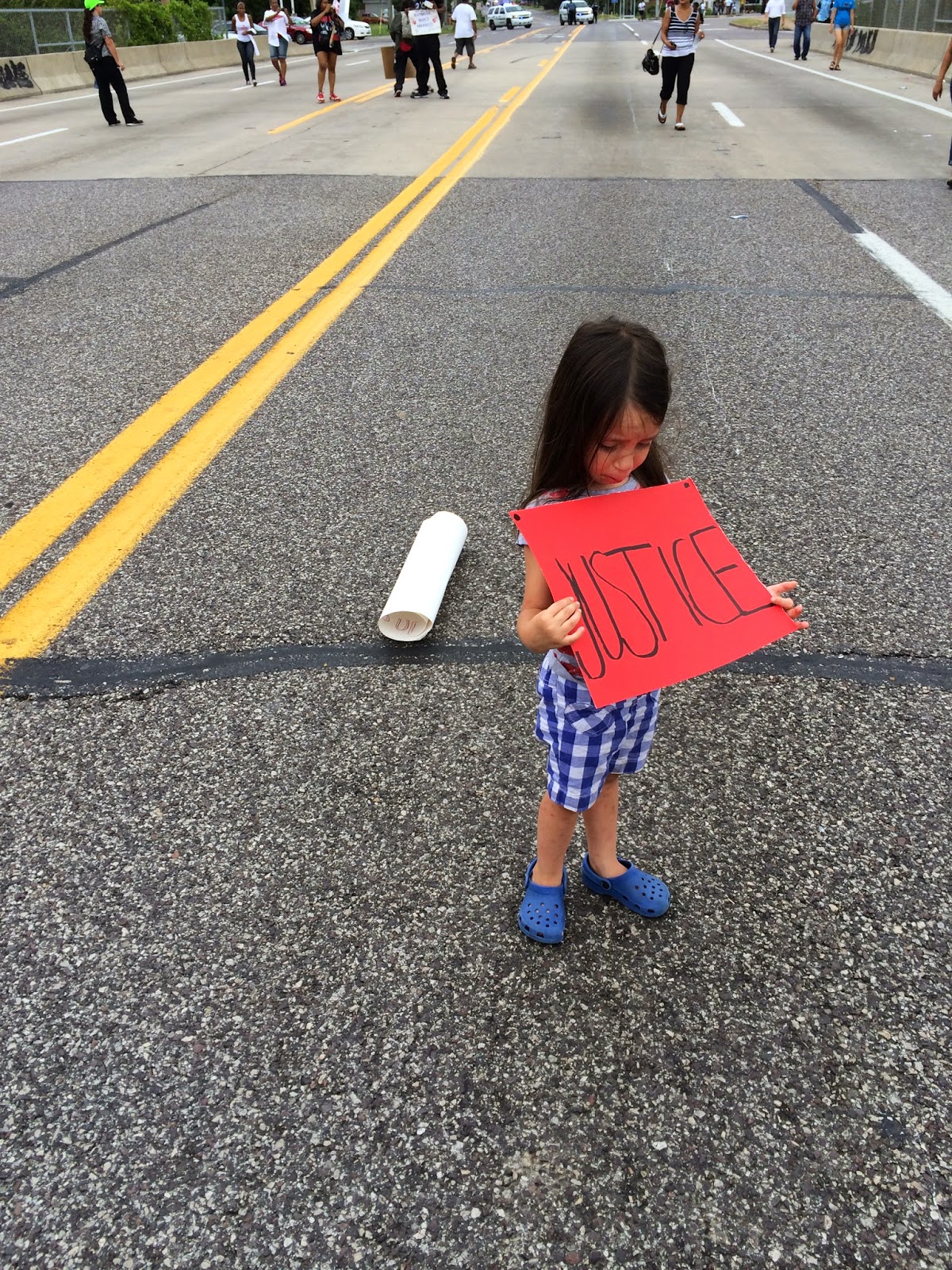 I started to figure out why I was there as I started to interact with people. The 900 mile trip meant we needed an oil change while we were there. While sitting in the car at the Valvoline on W. Florissant the attendant asked us why we in town. She was clearly surprised by the answer that we were there to protest. "Why?" she asked. At that moment, in that conversation, it was clear that we were there to do more than just show up and observe and be seen. We were there to meet people and talk to them, and to show that the media attention had an actionable result. The woman at the Valvoline and many others we met seemed both surprised and appreciative of the idea that the protesters could inspire a family to not only agree with their message, but to come down to hear it first hand. We were there to represent people from other parts of the country. We were there to show the community that they were not alone, that their message was being heard. 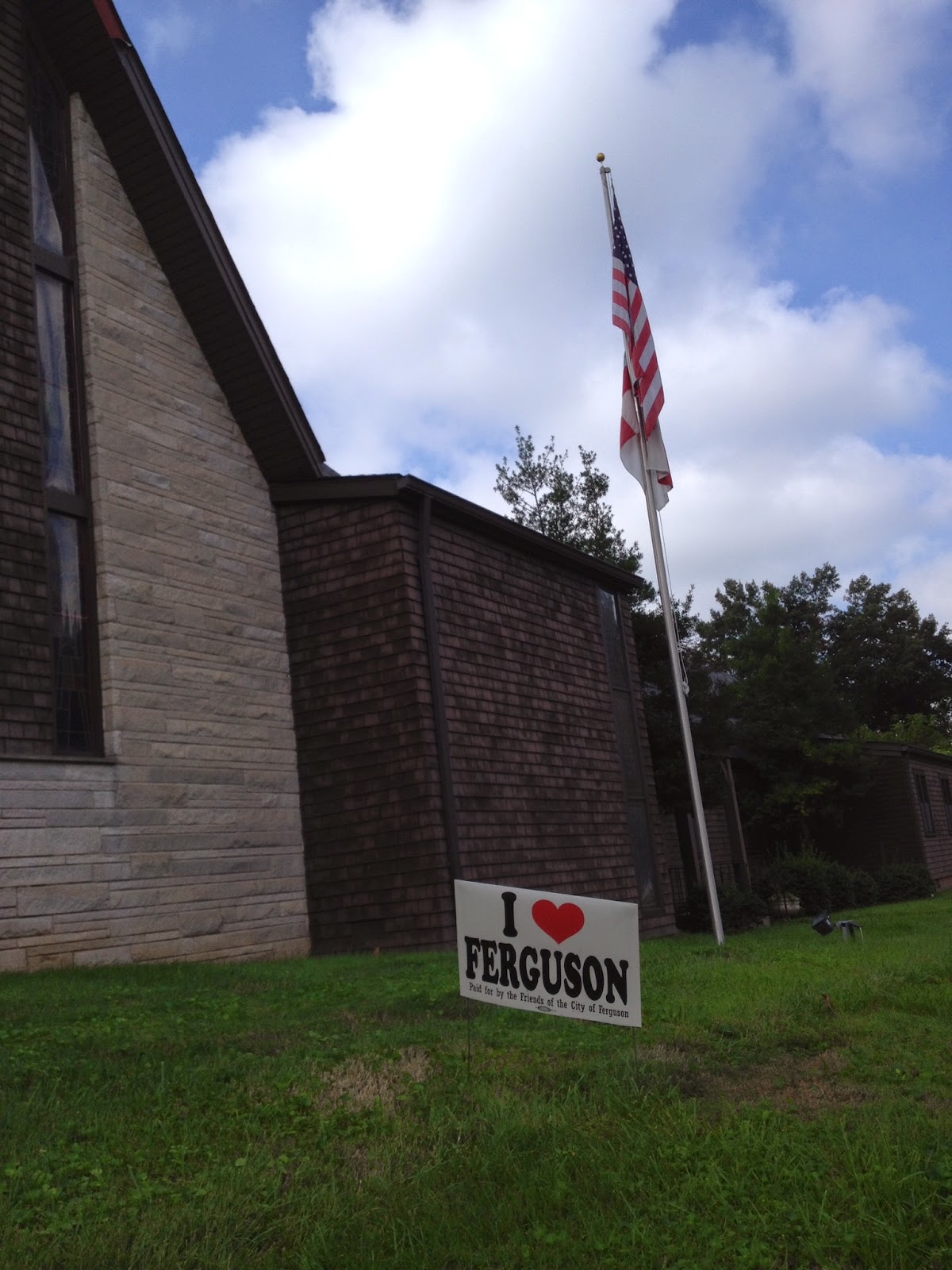 We went to church at St. Stephen's the next morning. The priest, as we expected, discussed the on-going situation in his sermon. The parish welcomed us and wanted to hear our story. They asked if anyone was celebrating a birthday, and I outed my wife who was given a cross on string as a gift. We saw what the church had been doing in the weeks since the Michael Brown shooting. They had an overwhelming pantry of donated food and clothing. The parishioners told us they had been serving many hundreds more people since the protests began than they did during calmer times. They were also re-donating food to larger shelters and congregations. People had come to them saying that there were older people in the Canfield area who were in need of food and toiletries but couldn't go out for them because they were either afraid, or because the stores were closed. The church was trying to find out how to identify these people and get them supplies, while also being unobtrusive. 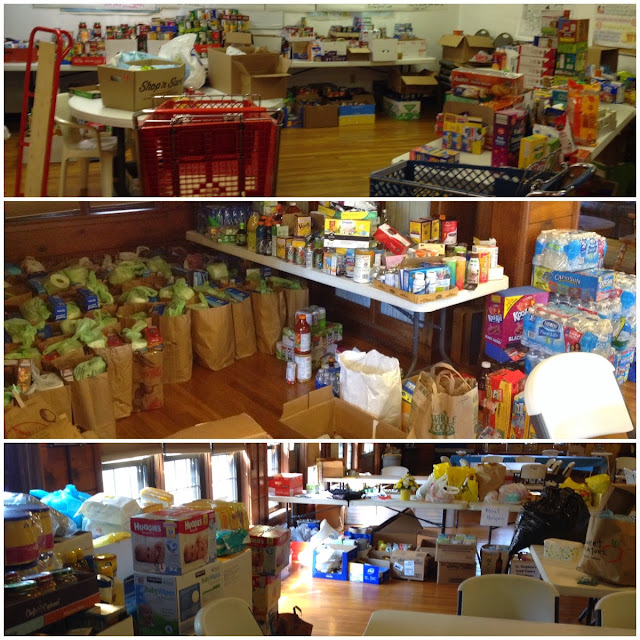 Talking to parishioners helped to understand another reason for me to have made the trip. I was there so that people could tell me their views, and I could bring them back to my community. The view of the people I talked with was that they were with the protesters, and against the rioters who they saw as being an outside element. They wanted people to know that their community was generally peaceful, but that they were all fatigued by the kind of injustice later revealed in the DOJ report. They wanted people to know that they were a normal community going through a tough time, and pulling together, and supporting each other. 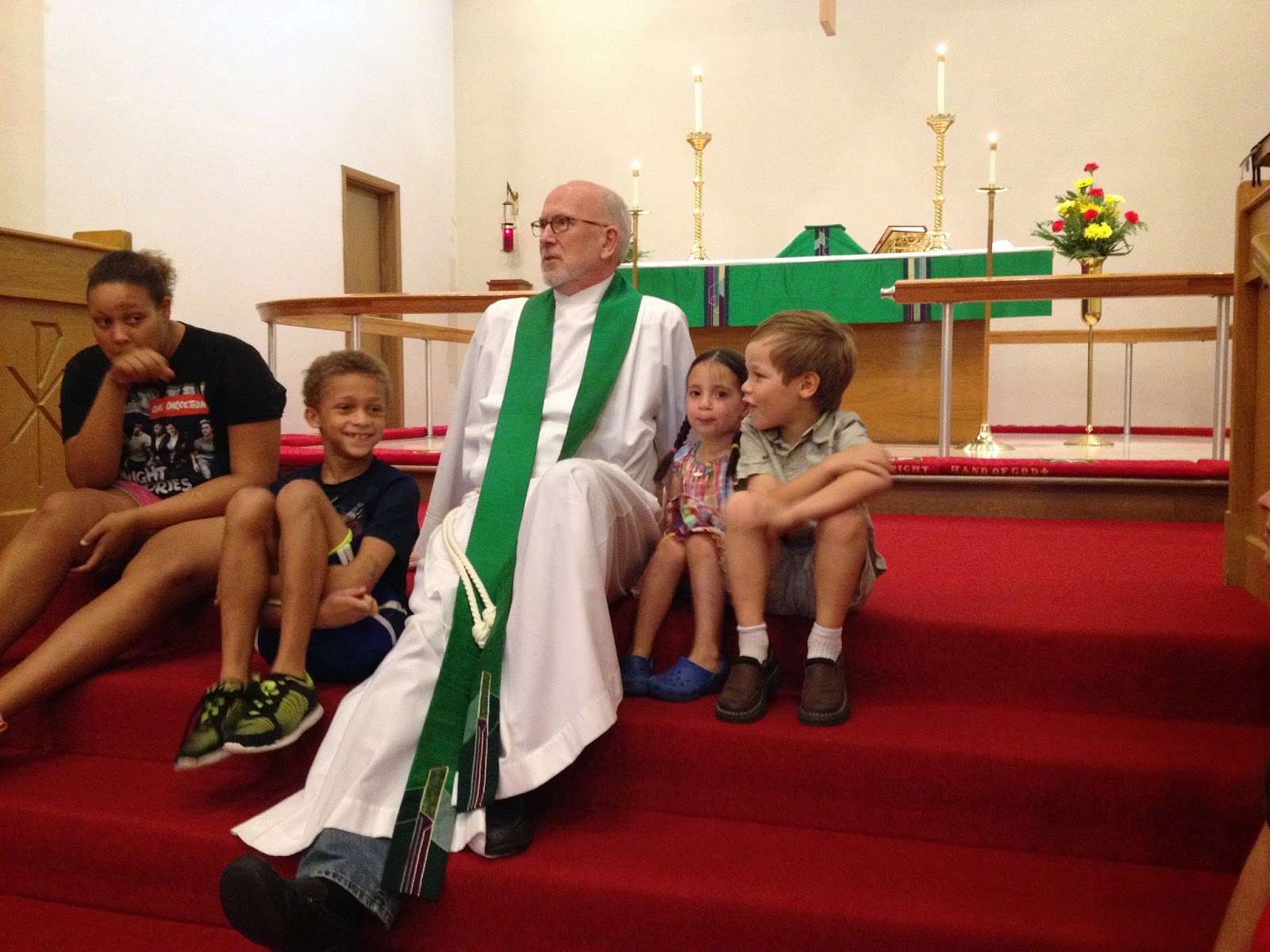 That's what I witnessed. That's what I brought back with me. That's what I told people in conversations about Ferguson. The people of Ferguson are ordinary people, just like people in any other city in America. All they want is to be able to get up and go to work and live their lives without being harassed, or beaten, or shot. They are people who decided they'd had enough and rose up and said so.

Regardless of how their community is portrayed, or reported on, they just want the message to come through that they're us. So that's why I was there, to internalize the experience, and the message. To try, in a small way to remind the rest of us that the people of Ferguson are just that, people. Regular people, who were put into an unusual circumstance, who helped shift the national focus and the national conversation, but who want us to know that they're really just us. 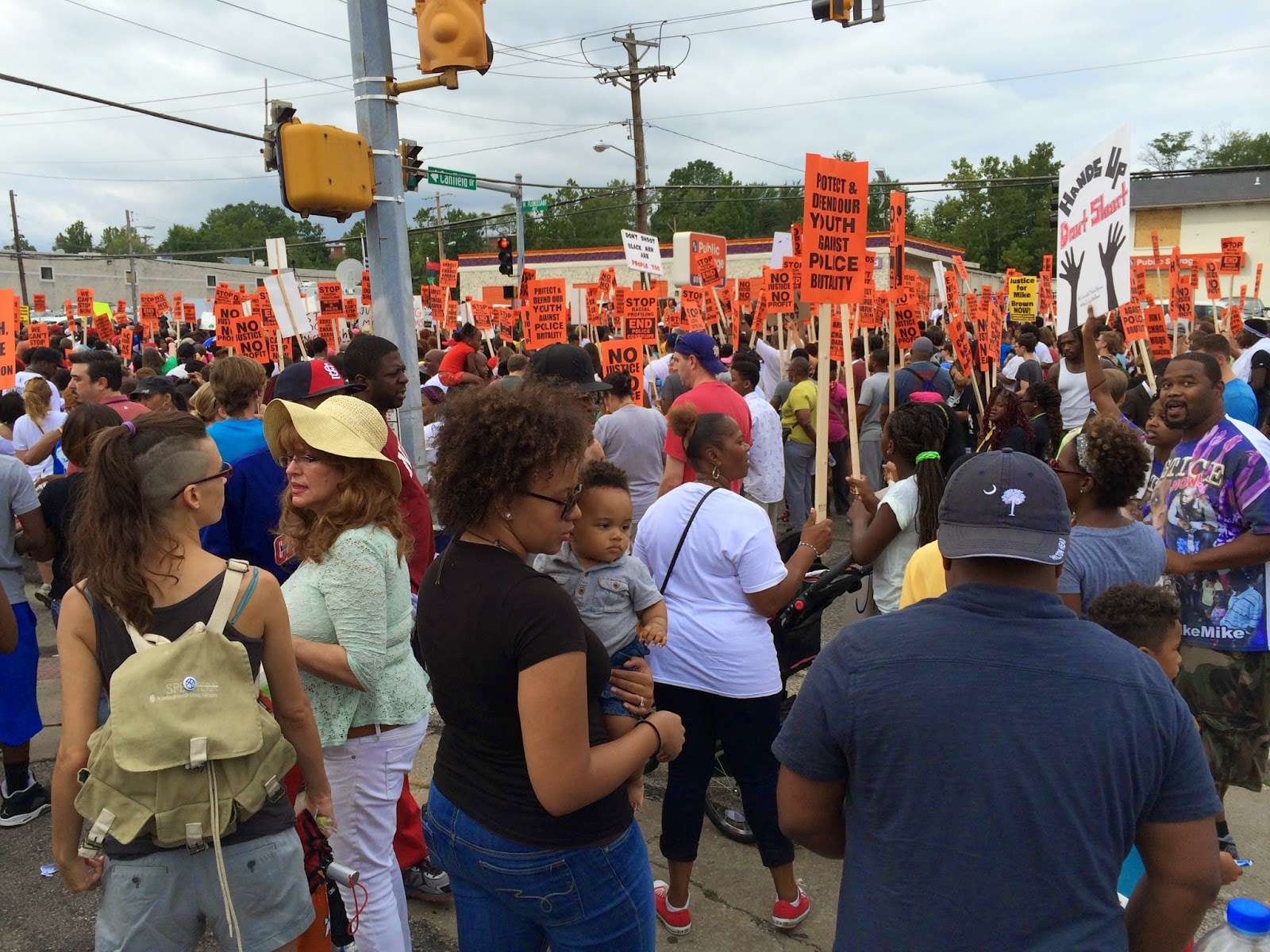