Review: Sundrops by The Harmonica Pocket 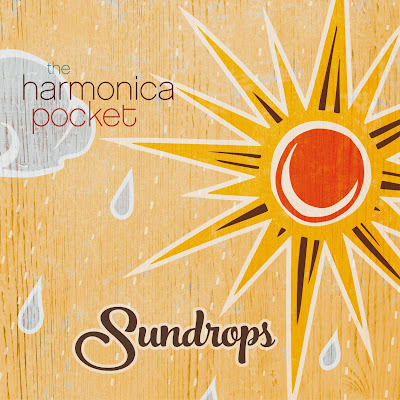 Welcome to another installment of my semi-regular music review series. As I've written previously I am on a quest to find kids music that won't drive grownups crazy. I wasn't raised with kids music. My mother decided she'd rather hear The Sound of Music 5,000 times over anything that had been marketed to kids in the 1980s, so I was raised on a steady diet of show tunes and The Beatles. Since becoming a dad my kids have been listening to a lot of mid-90s rock and hip hop. As they've gotten older and started singing along I've realized that I actually would like for them to listen to something with more appropriate themes for their ages. Still, I can't go full Disney. I knew I had to find something else to bridge the gap between Can You Feel the Love Tonight and Cold Hard Bitch, so I started exploring kindie rock albums. As always the reviews are written from the perspective of someone who wants to help you find music that your kids will enjoy and that won't make you want to stab out your ear drums.

Today's offering is "Sundrops" by The Harmonica Pocket. Musically the album offers your typical guitars, drums and violins that seem to be staples of kids albums, but is also delightfully arranged with walls of horns that are energetic without being overly aggressive. Comparisons can be fraught, but I'd say the album sounds a bit like Belle and Sebastian for kids.

The album emotionally arcs like a summer day, starting light and lively, sauntering through the afternoon, and then winding down with a lullaby. Within this arc it explores three sets of themes tied to common childhood experiences. The first four songs (Sing In the Sun, Raindrops, It's Gotta Rain -If You Want a Rainbow-, Sun Song) are about the weather and its effects on the world and our moods.

These opening tracks remind me of the kind of songs we would have sat around singing at my hippie Berkeley preschool. If you close your eyes and listen to Raindrops you can see kids at Esalen dressed in white linens and daisy chain crowns dancing in a circle. This is a great image for me, full of the freedom and thrill of discovery inherent in, "the free-range childhood" the artists (and I) remember in the late 1970s and 1980s. You could imagine these songs getting mainstream airplay in the late 1960s.

The only miss in the first four is It's Gotta Rain, which my wife and I agreed is "aggressively kiddie." It's Gotta Rain is lyrically repetitive, and front-man Keeth Apgar's vocals involve the common, hey-I'm-singing-to-kids intonation that I'm specifically trying to avoid when searching out music to listen to with my kids. That said, It's Gotta Rain has a beautiful melody and arrangement behind the vocals.

Parents who can power through It's Gotta Rain will be rewarded by the next four songs, which touch on near universal themes of childhood. Are You a Monster Too? on its surface about an insecure monster, explores deeper themes of childhood social anxieties. I can see myself name checking the song when talking with my kids about host of potential issues, from understanding the behavior of others, to accepting our own insecurities.

Digga Dog Kid and Surprise are up beat celebrations of childhood exploration and flights of fancy. I don't want to oversell Ukelele, but it's our favorite song on the album. The joy in the song is in the discovery so I'll leave it at that. (I know, I sound like the endings of the book reports that Ramona Quimby hated most, but seriously you have to hear the song for yourself in order to love it.)

The album winds down with the perfectly toned, melancholy yet peppy Sun Drops, a mellow cover of You are My Sunshine, and the sleepily bluesy It's Getting Night Now. Also included in the wind-down final third of the album is Butterfly Away, another beautifully arranged song that misses somewhat when it comes to the lyrics. In the person of a caterpillar dreaming of its future Apgar croons, "I'll be beautiful someday." It makes me want to hug the little caterpillar and tell it, "No no buddy, you're beautiful right now." I can see the message of the song being in line with the "It gets better" philosophy, and there's a good chance it can teach kids about the solace of being a late bloomer, but it's still not my favorite.

In the end "Sundrops" is a fun album that adults will enjoy, as will their kids. The songs are upbeat, educational, and very well arranged and produced. The music and instrumentation is on par with any current alt or folk rock album. I definitely recommend it for parents with young (pre-tween) kids.

You can find more of Harmonica Pocket including music clips, lyrics and the stories behind the songs, and a performance schedule at their website. They also have a YouTube channel.