My kids go to bed around 8:00pm. Occasionally they are allowed to stay up later depending on what's going on that night, a school event or a World Series game or what have you. Once they're in bed, we expect them to stay there unless they have to attend to some bodily function. Other reasons for getting up are generally met with skepticism and encouragement to get some rest.

Last night was a little different. I was happy when Buddy emerged from his room shortly after lights out complaining of an itchy foot. Something was unfolding on Thursday Night Football that I thought would be immediately applicable to his life.

Buddy has had the typical struggles at school with conflict resolution. Nothing extreme. Just the normal things you might expect from boys in  public school, at least from my experience. Lately he's been dealing with some bullying and some peer pressure about "snitching." We've always told him to find an adult rather than get in a fight. Sadly, that message hasn't always been reinforced by the adults around him when he has sought their help. Instead, he has often been left to fend for himself, and then gotten reprimanded for his actions. Though all of that, we have encouraged him to find ways to avoid fighting. Specifically, we want him to extract himself from conflict as soon as he recognizes it. Argument getting heated? Walk away. Someone looking like they want to fight? Walk away. Someone getting physical? Defend yourself to the extent necessary to safely get away. The theme is that you are going to face points in any conflict where you can end it by disengaging and walking away instead of risking making things worse.

The problem is, he's a kid so it's hard for him to remember these things in the moment. Let's be real, a lot of adults, when faced with fight or flight, don't make the decision we'd all prefer. Add in the school environment and it becomes very difficult for kids to avoid conflict when it's thrust upon them.

The other factor is that while I don't want him fighting, I do think he's a allowed to defend himself and I don't want to hear complaints about how he does it. I have long held the belief that if you pick a fight with someone, you don't get to complain about their response. If there's an outcome to the fight that you feel would go too far, don't start the fight. I was one of the few people who wrote defending LeGarrette Blount back in in 2009. Don't bully people. Don't tease them every day until they explode. If you do, you need to accept that one day things may go very badly for you. I don't mean school shooters or anything that extreme, that's a whole other level that is way more layered than what I'm addressing here. I mean more the A Christmas Story type of bullying and response.

So that's the background for last night when we saw a football fight unlike anything most of us have ever seen. I want to be clear, Myles Garrett should be suspended for at least the rest of this season and maybe more. When he is eligible, reinstatement should come with conditions like having taken and passed anger management training. What he did was inexcusable. At the same time, Mason Rudolph needs to take accountability for his part in the melee. It was Rupdolph who first went after Garrett's head and helmet, and it was Rudolph who pursued Garrett at a point where the fight could have been over.

It's this last point that I went over with Buddy. That there were several points during the altercation where each party faced a decision to let it end, or to keep fighting. In each instance, they made the wrong choice. Here's a breakdown of what I told him and how I think this fight provides a good teachable moment on de-escalation. 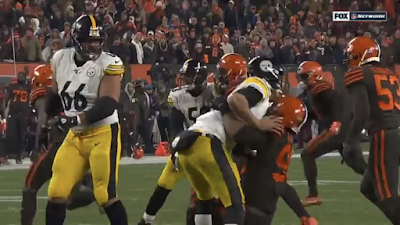 It's not really a dirty tackle, but it continues on past the quarterback releasing the ball. He's not injured and it's a tackle, not a high impact hit. It's not late, Garrett simply finishes the play. You can see why Rudolph might be annoyed, but there's nothing to get super angry about. It seems like Rudolph's reaction has more to do with previous hits to Steelers players and Rudolph's own frustration with throwing four interceptions. It could have been over right here with no fight at all, but Rudolph lost his cool. 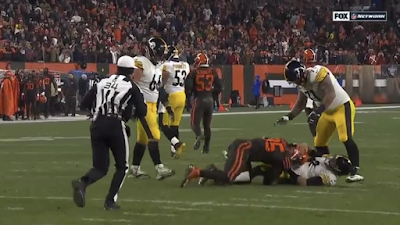 So the tackle is over and Mason Rudolph, with less than 30 seconds left in the game, has a choice. He can get up and maybe voice his displeasure at the tackle, letting the clock run and mercifully ending the game, or trying to rip Garrett's helmet off. He goes for the latter. This is a bad idea for many reasons. One of those reasons is that Garrett is much bigger an much more used to hitting people than is Rudolph. 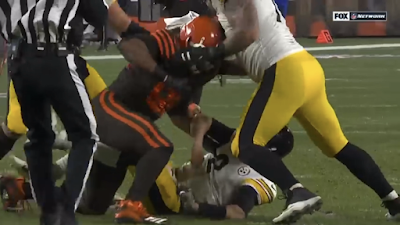 At this point Garrett is able to extract himself with head and helmet still attached to his shoulders. Unscathed, Garrett could have gotten up, done a little dance or whatever defensive players like to do after getting to the QB and let the clock run out. Instead, Garrett decides to show Rudolph how pulling off a helmet should go. He picks Rudolph up by the face mask, then throws him back down and comes away with the helmet. 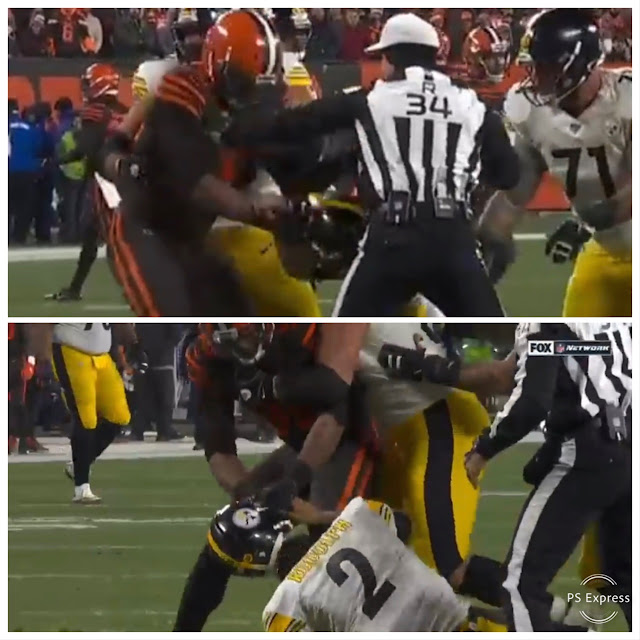 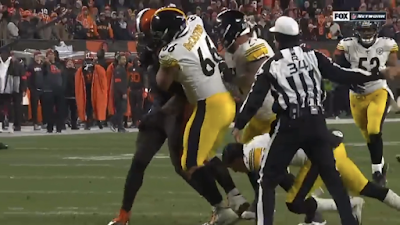 At this point the scuffle is effectively broken up. #66 David DeCastro and #71 Matt Feiler have Garrett locked up and are between him and Rudolph. Rudolph is again faced with a choice. Because the ball was thrown across the field and because Garrett's retaliation was so visible, there's a chance Rudolph's initial action went unnoticed, or will be overlooked. If he stops now, it's a penalty against Cleveland or at worst, offsetting penalties and the game likely ends on the next play. Instead, having a bad day in which he could not prove his skill throwing a football, he decides to prove he's a tough guy. Again, this is a monumentally bad idea for several reasons, not the least of which is that he's deciding to go after the much bigger man who just tackled him and then won the ensuing helmet-pull-off competition. It also misses an opportunity to end the altercation before it gets worse for everyone. This is the big point here. Each of these moments are opportunities to end things before they get worse. 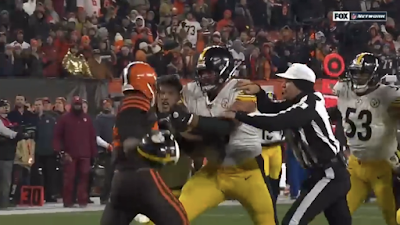 Moment 5: Garrett Does the Unthinkable 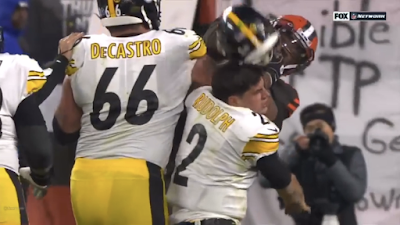 Fueled by anger and frustration, and perhaps emboldened by the two 300 pound men between him and his target, Rudolph decides to go after Garrett. Maybe he just wants to talk. Garrett is now faced with his own decision. He could drop the helmet and walk away. He could throw the helmet down field like Kyle Turley. He could have done literally anything other than what he did and this story might be over in 24-hours. Instead, he decides to use the helmet as a weapon and club Rudolph in the head. It's completely over the top. It's completely uncalled for. It's shocking. But it's not a complete surprise given how things had been escalating. I'll emphasize again, there's no way Garrett should have swung that helmet. There's no defense for it. At the same time, both players had multiple opportunities to walk away. By not taking those opportunities, they both bear some responsibility for what happened.

After all this, Rudolph's teammates subdued Garrett by punching him in and near the face mask several times, pinning him to the ground and then kicking and punching him in the head. Rudolph continued to half heartedly pursue the scuffle until being knocked down again by one of Garrett's teammates. Garrett, his teammate and the Steelers player who kicked Garrett in the head have all been suspended. Garrett is out for at least the rest of the season and possibly longer. For now, Rudolph has escaped a suspension but is likely to be fined.

As a parent, the lesson here is that in any conflict there are always opportunities to walk away. There is almost always an out. It may not feel great in the moment. You might feel like you're being a punk or losing face. Those are temporary feelings. If you can look past the moment and think even briefly about the possible consequences of your next action, you'll be able to avoid a lot of potential trouble. Continuing to fight in that moment rarely leads to a real win, but could end up with long term negative consequences.

I was satisfied that I had an opportunity to share this lesson with my son in that moment. I hope he can use it today at school. I want him to understand and recognize all the times he doesn't have to fight. Part of that is to keep him safe and on the right side of society. Part of it so I know I can back him up and trust him when he feels like does have to fight, though I hope that never happens.

As is often the case, after he went back to bed I realized that the same lesson applies to all of us in all of our relationships, that I need to apply this same lesson when I'm frustrated with a kid who won't clean up or is refusing to brush their teeth. I need to be able to see where I'm letting my bad day or my need to be in charge lead me down a destructive path. There's no chance of me hitting them, but I don't want to say things or behave in ways that could damage our relationship long term.

Myles Garrett's actions last night were terrible, but hopefully it's something we can all learn from.
Posted by Berto at 4:39 PM