I have always been a good sleeper. In fact, I'd say I'm a champ sleeper. I've slept all kinds of places. When I was a baby my mom took me to a party and set me down to sleep in the bedroom. When the party was over she went to get me, but I was gone. She panicked. She started searching frantically. And there I was, happily asleep under an enormous pile of coats. Several years later she brought me to a party at my aunt's house where the music was turned all the way up in the living room so it could be heard in the back yard. I fell asleep with my head between the speakers. At other times I have slept through earthquakes, a friend's bad acid trip that included the police coming to my house, and the newspaper guy throwing a paper through my closed bedroom window. Seriously, I can sleep almost anywhere, and through almost anything. However, like all legendary heroes I have one weakness: snoring. I cannot sleep through snoring. At all.

As a kid this weakness led me to leave sleepovers and walk home. As an adult it has led to a near inability to share a hotel room with anyone. I first learned this when I helped my step-father move across country. Each night I ended up wearing noise cancelling headphones and sleeping in the bathroom. Through this experience I learned that motel bathrooms get smaller as you travel west. In Arizona I had to sleep with my feet propped up on the toilet.

Over the years, on business trips or reffing trips I've slept in various non-bed parts of hotels. I've slept in hallways in Ft. Meyers, parking lots in Redding, and a balcony in Saranac, just to name a few.

My third is a whole other deal. She snores like a 45 year old man who's got 40 years of smoking under his belt. And she sleeps in my room. So now, after being on the couch for several weeks before she was born, I have been on the couch more nights than not for the last two months. While I'd prefer to be in bed, it's been fine. My wife gets to sleep, the baby gets to sleep, and I get to sleep. It's been fine. Right up until we took her on a short vacation. We ended up in a motel room, and I ended up in a familiar spot.

I tried pillows on the head. I tried ear plugs. But I remember vague facts from my undergraduate audiology class that talked about how some sounds don't really come through your ears. Some frequencies actually penetrate you skull, rendering ear protection useless. I'm pretty sure this is the case with snoring. So here I was. 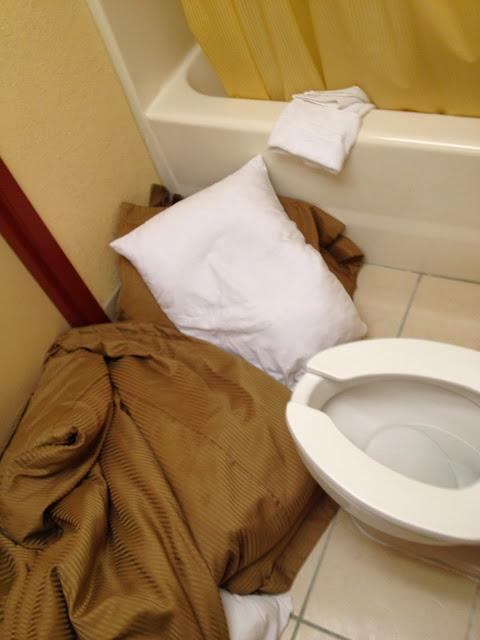 On various occasions my wife has suggested that I have her be the one to move. But I was loathe to wake up my pregnant bread winner just to ask her to move to our questionably comfortable couch. Asking her to move these days would defeat the entire utility of having her and the baby in the same room. And there's no way I'm going to try to convince my beautiful giver-of-life to sleep on the floor of a motel bathroom. So I end up here, because I'm the dad, and honestly, I see her rest as being part of my responsibilities. If takes making a nest in yet another motel bathroom to get it done, so be it.