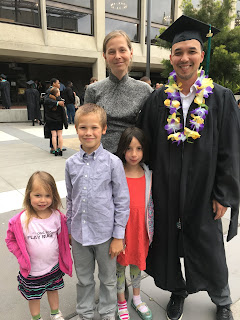 The cries of the in-debt college graduate remind me a little bit of the underwater homeowner of a few years back.  Some who were underwater were basically victims of unscrupulous lending. If someone says you can afford the loan, you believe them. Not all were duped by predatory lenders but some were.  In some ways college graduates over at least a generation were given a similar lie, “Hey, it’s cool.  You can totally afford this. The market always goes up.”  As we are seeing now, and as we saw in the housing market, there is always a bubble.  Now that the education bubble is seen to be bursting I see many people suggesting that all college loan debt be forgiven.   Facebook is periodically awash in petitions for legislation that would forgive student loan debt.  The basic premise is a mix of, “It would stimulate the economy” and “It’s time the rest of us got a break.”  What really disturbs me is that many of my friends who claim to be “The 99%” and who opposed the Wall Street bailouts are now calling for their own handout.  This seems both naïve and short sighted.  After all, wouldn’t this just take billions off the books of the very same banks we just bailed out?

The other thing I wonder is whether the Feds still own our debt or if it's been securitized and sold off. If its backing bonds then forgiveness would essentially default those bonds and hurt investors which could have other nasty macro-economic effects. If the Feds guarantee the bonds and forgive the debt then they put themselves in a huge hole that tax payers, including those who never had the chance to go to college, would need to pay off.

But, maybe like or unlike the underwater home "owner," we did it by choice. Beyond that, we did it by privilege. Sure we're not the elite but we had opportunities that not everyone has. And I say this as someone who's had to fight, in one way or another, for almost everything I've achieved. Still, I know I've also been very lucky.

My question is, why do I deserve say, $60K more than the really smart motivated person who had to forgo college to help raise their siblings, or take care of their parents, or didn't qualify for loans or whatever it was that kept them out of school? Why do I deserve it more than someone who never had a chance to mortgage themselves?

Also (sorry for the rant here but I am still me) the thing about the indebted educated class is if we suddenly find ourselves out of debt it's no sure thing that we'll go out and stimulate the economy. In fact I'd suggest that we're way more likely to put that extra money towards our credit card debts or other things we're already paying for. Maybe a little extra principle payment on that second higher rate mortgage they made us get as part of our home purchase. Or maybe we'll just put it in savings. The point is we won't do much to actually stimulate the economy. Just like trickle down economics didn't stimulate job growth. Just like bailouts for Wall Street and tax breaks for oil companies and bailouts of airlines didn't create jobs or save jobs or stimulate lending or reduce gas prices or get us back to the sweet sweet Clinton Era.

I like what Kai Ryssdal suggested, If you really want to stimulate the economy give $10K to kids between the ages of 13 and 19. They don't save. They buy all kinds of stuff.

The thing that bothers me is that there's a lot of people with student loan debt championing this thing and not many people asking what else is affected if it happens.

Sure, I'd love an extra buncha money, but what is the real economic impact? How many of us just want free stuff?

Also, are all mortgaged selves equal? If you spend $200K getting a PhD in something that's got no job prospects are you contributing to society the same as an engineer or MD? Should we, the American taxpayer subsidize a degree that doesn't contribute to the GDP? I think there's a lot of issues here that go beyond helping out our best and brightest.

I hope PhDs are valued, I'm getting one right now. But I'm getting one in an employable field. I’m not saying PhDs aren't important but if you get one in a field with no prospects you basically made a poor choice. Why should I, the taxpayer, subsidize someone's vanity degree?

Right now we're desperate for engineers and doctors. Our Federal government is importing them from other countries. Maybe if we had more doctors the ones we have now could work normal shifts and not make mistakes that kill people. Maybe (but not likely) supply could keep up with demand and drive down costs. There may be a problem with having too many MDs and engineers but we're decades away from having to think about that.

My real question is, where is the real value to the economy of forgiving this debt? Especially since we're likely to put our savings towards things that don't stimulate growth?

I feel you, oh educated and indebted minions. I am a farmed-out adjunct making next to nothing. I'm also facing a future where tenure track jobs may not exist. But I'm doing it with my eyes open, not expecting the government to come in and wipe out my debts. It's not that a PhD in English is "bad," it's that if you do it we can presume you're smart enough to know what you're getting into. If you're doing it for love of the subject or love of teaching or whatever then that's great! I am all for it. I just don't think the Feds, and by extension tax payers, should be subsidizing the dream.

I also don't think we should be giving huge tax breaks to billion dollar corporations, I'm not for most farming subsidies, or tax breaks for the rich. If I don't think others should be getting handouts based on their decisions I have to apply the same standard to us.

Also, taking it away from the philosophical "are college students valuable or deserving" discussion, can anyone show that this would actually help the economy, aside from this vague idea that we'd then have disposable income, which seems unsubstantiated? I know if I had an extra $2,000/month or whatever my household will be paying when I'm done with school, I'd be putting it towards my mortgage or a college fund for the kids. I would not be putting much or any of it back into the economy.

True, I have a mortgage. But I already bought the house so forgiving my debt isn't going to get me to buy more houses, the money from that purchase is already out there. It's a done deal. The trends I've seen seem to show that our people, the educated middle class, are not inclined to go out and do a bunch of spending. It's why the Bush stimulus didn't work. If you send me $600 I'm not spending it. I'm paying down credit cards or saving it. It doesn't really help the economy.

I did some very rough fast research. If the national student loan debt is roughly $850B let's say the government holds 1/4 of that. So $200B. Let's say half of that has been turned into bonds. If you forgive it you have to call those bonds at a cost of $100B plus the forgiveness is going to cost you $200B. So you're now at a $300B outlay. Then you figure you're not getting interest that you would have gotten on those payments so maybe that's another $100B. So now we're looking at $400B for this idea. Roughly half of the Wall Street bailout. Is that really what we want? Without knowing the projected gain it just doesn't seem worth it.

I've seen this a million times and yet no one has actually presented on HOW this would stimulate the economy when people with degrees are more likely to SAVE than SPEND.

I didn't want bailout for the privileged class above me, why should I support a bailout that ignores those less fortunate than me?  How is this anything than another hand out for people who have a higher earning potential than those who did not have the good fortune to need a student loan in the first place?
Posted by Berto at 4:14 PM No comments: