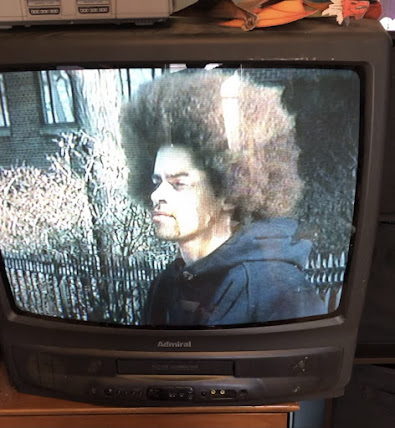 I'm a child of the 80s who came of age in the 90s, so it goes without saying that I was obsessed with Mtv. Even in the years before we had cable, I was hooked on it. Every time we went to a house that had cable, I wanted to watch music videos and VJs and music news and Remote Control. This was a boon to my mom because if she took me to a grown up dinner party or some other boring thing, she knew there was a chance I'd sit there watching Dire Straits or Duran Duran for hours.
My freshman year of high school, Mtv helped pioneer reality television, airing The Real World in 1991. I watch every episode twice trying to keep up with the network's seemingly random schedule. I loved it. It was weird and contrived but also somehow pure. That lasted about three seasons, before they found ways to push the drama and diminish the reality. Some time after Real World 3 in San Francisco, I stopped watching. Until 2001.
For the tenth anniversary of the show, the production headed back to New York and featured a cast member from Berkeley, Ca, Malik Cooper. Malik is one of my best friends and I'll be honest, I was jealous. I had harbored a dream of being on the show back when I was too young to do it, then given up the dream when the show lost its tenuous grip on "reality." Still, when I heard he was going, I was a little bitter.
Despite that, I watched every episode I could, considering I didn't have cable. My mom taped the episodes and sent them to me in L.A. where I watched them on my 12-inch TV/VCR all-in-one unit. Fast forward to Christmas break 2020, the season for doing cleaning and organizing projects. I decided to take one more pyrrhic stab at organizing the LEGO bricks in Ryu's room, but I wanted something to watch. The only media device there is an upgraded 32-inch TV/VCR all-in-one. I knew what had to be done, a full Real World season 10 re-watch, with Ryu at my side for most of it.
What I didn't expect when I slid that tape in, is that many of the themes of the show were still relevant today.  In some ways, that season of the show was more relevant in the winter of 2020 than it was at any time since it aired. The central themes are conversations about race, especially as viewed by people who grew up in different parts of the country. Another theme is gender and gender norms. Watching with my mixed race, transgender kid brought up a lot of interesting questions and conversations. The more I watched, the more I knew I wanted to talk to Malik about what he remembers and what's changed or stayed immutable over the last twenty years.
So I called him up and we recorded this episode of the podcast. In it, we talk about race, class, gender and The Miz. We talk about his new life as a dad and how to manage all these damn LEGO bricks. We also get to the bottom of an old controversy, what exactly did Malik say about being the only one to go to college?
Posted by Berto at 12:15 AM No comments: