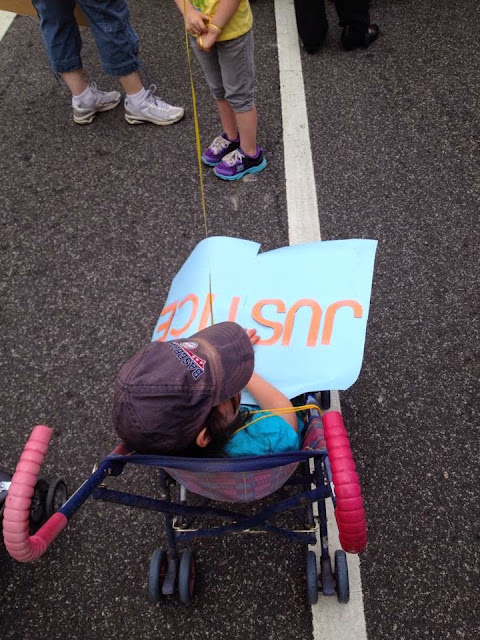 Over the years that we've been together my wife has become increasingly interested in social justice. We sometimes joke that it was dating a tan-man that started her on this path, but the truth is it was always there. Since the events in Ferguson last year T has felt a stronger pull to go out and do what she can to try to help. This has primarily manifested in attending rallies and marches.

I have tried to support her as best I can. This past summer we drove 17 hours to Ferguson to join a march. Most of my support has been less dramatic. Often I do not attend the rallies, instead I support her by holding down the fort at home so she can go out.

This year T said that what she wanted for Mother's Day was to join the Million Moms March. So we did. The march was led by a group of mothers who had lost children to police violence, and some who had lost children to other gun violence. We rallied in the park, then marched down to the Department of Justice where the mothers presented a DOJ representative with a list of demands. 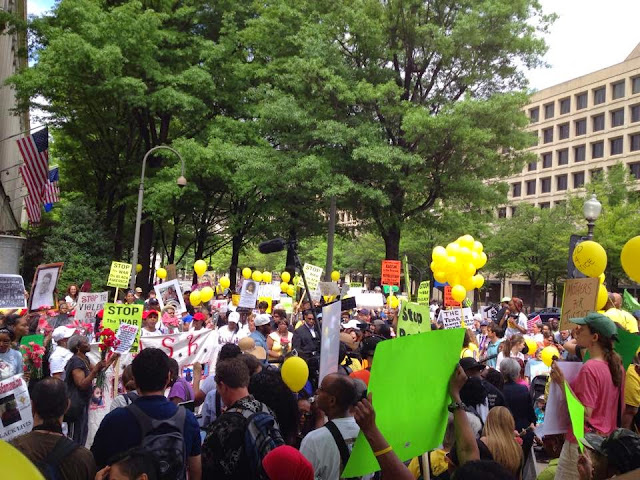 As we marched back to the park we witnessed an interaction that presented a perfect capsule for the divide in race and class relations in America. An African-American woman who had lost a family member in a police shooting was marching and speaking into a bull horn. She was giving the world her vision for the future and her demands of the justice system. There were a few other rallies and gatherings downtown today as well, including one along our parade route that included ringing a bell and reading out the names of people killed in the Vietnam War. It was a coincidence of timing that our march passed by the war memorial during the reading of the names. 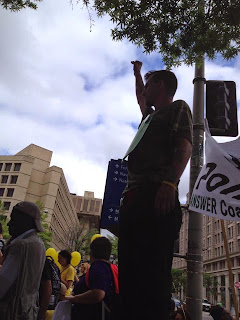 All of a sudden an elderly white woman materialized in our midst. Her presence wasn't odd because she was white, or because she was older, it was diverse crowd. It was odd because of how she was moving, in the opposite direction of the marchers, sometimes turning around as if looking for someone. She seized upon the the woman with the bull horn, imploring her, "Please! Please be quiet! Stop it! This is a memorial!"

The woman with the bull horn wasn't having it. Not today, not during this march where people held signs that read "White silence = white compliance." She turned on the elderly woman and said, "Don't you touch me. Don't you talk to me. I will not be silent. You are not a black woman. You don't have to worry about them shooting your son down in the street. They shot my family down in the street. You're safe. Your kids are safe. Now get out of my way."

I wondered if this woman from the memorial didn't have to worry about her son being killed by police because she's white, or because her son had already been killed in Vietnam. That's our problem. We often fail to see that the kid killed in Vietnam 40 years ago, and the kid killed in Baltimore last month were killed by the same system. What the woman from the memorial may not realize is that the interruption of her moment is exactly what people mean when they cry out "No justice, no peace!" That phrase isn't a call to riot. It is a reminder that the disruption of other people's lives is sometimes the only way to get their attention. It isn't callous disrespect, it's both the calculated and collateral disruption of things other people take for granted.

I'll admit that I'm not totally convinced about how much change these rallies lead to. Not that I have any better ideas for those of us who do not roam the halls of power other than the old stand by of making sure we get out and vote. But I do see value in my wife and my family attending these rallies. 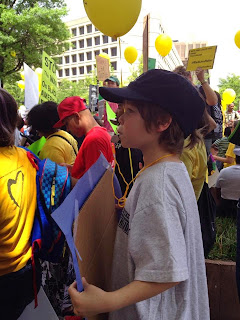 Other than my wife being able to fulfill her obligation to her beliefs I think these rallies are great educational opportunities for the kids. It would be easy to read that statement with cynicism and say that I am exploiting these events for disaster-tourism-home-schooler-field-trips. I don't think I am. I want my kids to see what I saw when I was kid growing going to marches in Berkeley. 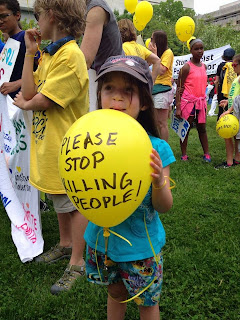 Most of all I want them to see that on a day during a weekend when she could have asked to do anything, their mother wanted to spend her time trying to help others. I want my children to follow an example that she is providing that I otherwise would not, at least not in this way.  I want them to see that the most important things they can give to others is their time, and their presence, and their passion.