I was on the sideline that day at the Bingham Cup in June 2006.  In fact I had just returned to the sidelines after having been removed by a teammate a few minutes earlier for getting a little too chippy with the opposition players and supporters.  The game had been back and forth with each team holding slim leads for short intervals.  My boys were losing by two in the final minutes to a team we had beaten handily just a few months before.  As the game went into stoppage time my club put on a furious attack, one that gained a few meters at a time but which constantly threatened to be stopped by a penalty, or a lost ruck, or any other number of things.  There was desperation in the air on both sides as the next whistle would certainly be the end of the game.

What happened next is far and away the greatest moment I’ve ever been a part of as an athlete.  With our attack stalled just shy of the half way line our scrum half Marty stood back from the ruck and called for another player, any other player to throw him the ball.  Somehow one of our flankers was able to toss the ball out Marty who stood approximately fifty-five meters out from the posts.  In one fluid motion Marty caught the pass and drop kicked the ball, it seemed, directly into the sun.

Two years later I was on the sideline again.  I had missed most of the tournament due to my brother’s high school graduation, a ceremony I wasn’t going to miss as it was a bit of a miracle itself.  Still, I had managed to play in parts of two games that day.  Our boys had lost to our rivals from New York in the quarterfinals.  It was a bitter defeat.  As we watched the final Marty, our little Irish fireplug who’d be showing us around Dublin later that night, remarked, “Y’know Berto, I don't know if I can keep doin' this.  Every year we get close, but we never get over the hump like. I’m tired of just showin' up and playin' well.  I want to win the damn thing and I just don't know if we can do it.”

Another two years go by, it's 2010 and I’m no longer a player.  Instead I’m back at Bingham as a referee.  It’s different, but I’m thrilled to be involved.  The top four teams roll through pool play leaving no doubt who the class of the tournament are.  The quarterfinals are also unsurprising as all four of the top seeds advance.  Then, in the semis, Marty and the boys are set to face their old rivals from New York.  Again, even though our boys had beaten them easily earlier in the year, New York, as they do every two years, is putting up a tremendous fight.  Some time in the last five minutes Marty gets his bell rung and is forced to come off the field to have bleeding controlled.  At this point his team, our team, is down by seven.  Again they mount a furious charge and with no time left they punch one across dead center between the posts.

As I come back to the referee’s tent after my match another ref, also a former teammate tells me, “The Renegades are about to go to overtime against Gotham.”  The implication is that the conversion is a given.  It’s directly in front of the posts and Marty is coming back on to take the kick.  It’s a done deal.  Marty is one of the most accurate and strong legged kickers I’ve ever seen on a pitch at any level.  Hell, his nick-name is “Miracle Marty,” so named for how many games he’s won the club with his boot.  I figure I have plenty of time to report my score then go over and quietly, perhaps from a distance, watch the end of the match. 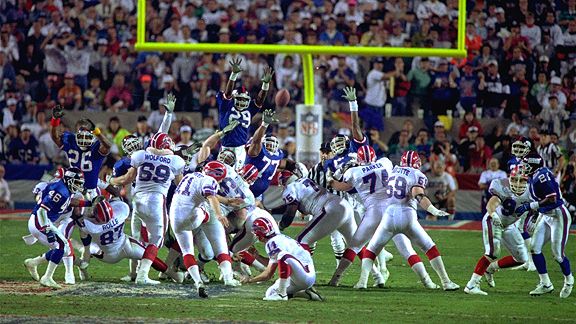 I remember Scott Norwood.  If the name doesn’t ring a bell he’s the kicker for the Buffalo Bills who missed a game winning field goal in the Super Bowl.  The Bills went to four consecutive Super Bowls in the early 1990s, an NFL record, and didn’t win any of them. The closest they came was a forty-seven yard field goal attempt with eight seconds left that went wide right.  The kicker, Scott Norwood is usually associated with only that one kick.  It was part of the plots of the films “Ace Ventura” and “Buffalo 66.”  People blame Scott Norwood.  I feel for him.  I’ve done some kicking in my career.  I would describe my kicking ability as serviceable, sometimes even useful, but I was never great.  I was never Marty, or Scott Norwood.  At the time Norwood lined up for his kick against the Giants in January of 1991 he was the Buffalo Bills all time leading scorer, the next year he would kick the winning field goal in the AFC title game to send Buffalo back to the Super Bowl, but most people don’t remember that.  Most people remember “wide right.”  It’s not fair.  As a kicker I know what it’s like to line up a ball, set your self, approach and strike.  A lot of the time you know as you hit it if it has a chance.  As a kicker I have a particular empathy for the job and the people who do it.  Often disregarded as not being real players, kickers are thought to be nearly interchangeable, until you really need one.  One problem with kicking is that until you miss an important one people don’t really notice you. And because they don’t notice they don’t understand what goes into it, how any one of million different things can go wrong.  A slightly misplaced plant foot, a small difference in your strike point, a sudden gust of wind, tall grass that tilts the tee, ground that’s softer than it seems, any of a million things that can go wrong.  Certainly getting hit in the head and leaving the field for blood can have an effect on a kicker.

I didn’t see Marty’s kick.  I didn’t think I had to.  I was going to report my scores and then go quietly, and perhaps from a distance, watch the rest of the match.  When I got near the fields I heard what had happened.  Marty had missed.  The boys had lost to their rivals 15-13, just two points from a tie.  Not just a tie, but a tie with momentum!  A tie where they had just shown that they could win!  But it wasn’t a tie.  They couldn’t win.  Marty’s kick had sailed wide.  By the time I found him the game had only been over for a few minutes. His eyes were red and swollen.  I embraced him and held him for a good long time.  “Berto,” he said to me, “I fucked it up man.  I really fucked it up.  I cost us the chance and it was an easy one man.  How many times have you seen me make that kick Berto?  How many times?”  A million times.  I’ve seen him make that kick in just about every game I’ve seen him play.  I tried to remind him that even making that kick didn’t promise anything but another few minutes, that the other team could have taken the next kickoff back for a score, that ultimately it didn’t matter.  I knew it rang hollow.  What can you say to ease the pain of player who’s just missed the biggest kick of his life?  What did they say to Scott Norwood?  “You see Berto man, Becky and I are gonna be wantin' to start a family now. Y’see, I know this is my last Bingham Cup.  I wanted to win it.  I wanted my chance and I had it, and I fucked it up.”  All I could think to say was, "I love you Marty, don’t dwell on it, this doesn’t define you," and then go out and make sure we drank safely that night.

Back in 2006 the fields on Randall’s Island in New York are more dirt and needles than grass.  Throughout the three days of the tournament the British and European teams were incredulous about the condition of the fields they were being forced to play on.  The field for this game was especially sparse on vegetation and the dust clouds lingered in the air as strong men fell violently to the ground.  It was though this haze, staring into the setting sun that we watched Marty’s kick sail through air.  It too seemed to hang forever as if gravity was aware of the moment and wanted us to savor it.  I remember following the path of the ball, losing sight of it in the glare and haze, then finding it again just as it descended over the crossbar.  For a moment everything was still.  When the referee’s whistle split the air between what was inevitable and what was possible I remember thinking “Please let it be over.  Please don’t let there be another kickoff.”  The first whistle meant the kick was good, the second meant the game was over.  We had won.  The New York fans ignorant and arrogant began to cheer and rush the field clanging they’re infernal cow bells.  One of them ran up to me and screamed “Yeah! Yeah! How do you like that?”  “I like it just fine.” I replied, “We just won.”  As our sideline rushed out to pay tribute to the fifteen lads on the field the reality set in for the home side supporters.  They had just been beaten by a fantastic play, a 55 meter drop goal with no time left.  We ended up third out of twenty-nine teams.  It was the club’s highest finish in three appearances in the Bingham Cup.  The legend of “Miracle Marty” was now firmly established, and nothing could ever take it away.