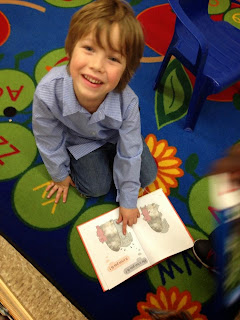 A cool thing happened over the weekend, my son learned to read. Not in a miracle phonics thing you buy off of late night TV way. He's been learning to read for years now. I'll admit, I was actually starting to get anxious about it. He's recently six-years-old and I remember that by six I was reading on my own, a lot. But until last week The Boy wasn't doing it.

It's not that he couldn't read. I was pretty sure that his not reading was due to his general abundance of caution. The kid doesn't like to do anything until he knows he can do it. He's not a huge risk taker. This is a kid who used to walk to the curb, sit down, swing his legs down and then stand up because he didn't trust himself to just step off the edge. So he kept asking that things be read to him, which is fine with books but can get tedious when walking down the street.

I DON'T KNOW!!!! No, not really. But buddy I believe that you can read it if you really want to. He's spent the last several months sounding things out as if they aren't meant to be words. He's been sounding like Dory speaking whale in Finding Nemo, "Puh Huh Own Buh uh uh Ka" No bud, it says "Phone Book."

I don't know what happened over the weekend. Maybe his curiosity finally overcame his fear of failure. The result is that he's reading. Ever since the weekend it's been,

OK, I swear I'm making these examples up.

The point is that suddenly having a reader is awesome. It opens up a whole new world of possibilities. Now when I'm cooking dinner and he wants a story he can read one. All on his own. Even better, he can read one to his sister too. The other day in the car he read her Fox in Socks. That's some next level ish for a kid who just a few days before claimed he couldn't read the header on the Cheerios box. Now he's asking me what riboflavin is. (And of course I'm like, "Let's look it up!")

If you already have older kids maybe you know the joy of suddenly having a reader. If you have younger kids, I'm telling you there's a light at the end of the tunnel. Pretty soon your little ones will be able to involve themselves in the joys of textploration, which come to think of it probably comes with a whole other set of parenting pit falls.

But I'm not going to worry about that today. Today I'm stoked that my son just became a little more self sufficient. Me and my buddy Jim can figure out the rest as it happens.
Posted by Berto at 3:00 AM