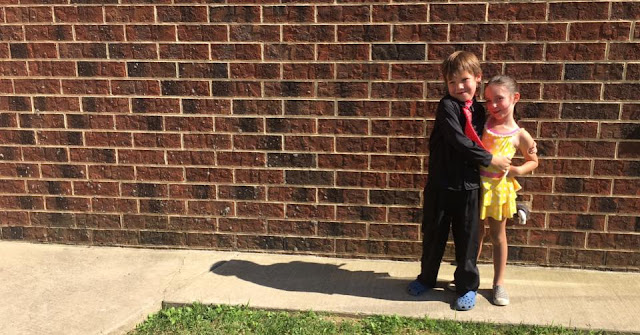 I am not a Men's Rights Activist. I am a feminist. This is not a rant about how men have it hard. Men, in general, don't have it hard. This is just a story about a little boy who wants to dance. His name is not Billy Elliot.

I grew up with a single mother who wasn't into sports. It's not that she didn't like them. It's not that she didn't know that sports exist. It's just that sports weren't on her radar. While my friends were running shuttles on the soccer field I was being shuttled between art and dance classes. I loved art and dance. I danced on and off through high school. I went to Shakespeare camp. I was a skater. I danced. No one ever questioned it. I don't remember a single time when I was made to feel like I didn't belong. To the contrary, I feel like I was always welcomed.

This is the experience I relied on when I signed Buddy up for dance class last fall. It wasn't the same for him as it had been for me.

From the beginning he was subjected to teasing from the girls either in his class, or waiting to take the next class. Too many times he was told that "boys don't take dance. Boys don't do ballet. Boys don't wear tights." Just like that a few dumb ass elementary school girls had undone months of me showing him videos of male ballet dancers and regaling him with stories of my days spent in tights, going over the initial positions, and demonstrating my still excellent turn out. He didn't feel uncomfortable in in his leotard and tights until other kids decided that he should. It wasn't until a couple months into the class that the teacher told us he could wear warmup pants if he wanted. We didn't know that earlier because the printed instructions and requirements were very clear about what was expected. The times when I raised my concerns with his teacher she would look at me blankly and then tell me she hadn't heard or seen anything. A couple times there were assurances that they valued Buddy just like the rest of the dancers. Nothing changed.

Despite the setbacks, as I periodically rebuilt his confidence, he decided he wanted to participate in the spring recital. So we paid the surprisingly high fees for the recital and the costumes for both kids and committed to a second session of classes. (You had to sign up for the recital early in the first session, there was little time to decide if you liked the class or not.) It was at this point that the underlying discriminatory indifference became clear.

Once we assured him that his costume would be more masculine we were told that his had not yet arrived, but it would. We were told that every week for two months. When we arrived at the dress rehearsal, which was also our only chance to take pictures of the kids on stage (there is a strict no photo policy during the performance), we still did not have a costume. When T did his makeup, we still did not have a costume, but we did have little girls squealing "EW WHAT IS HE DOING?" because they are asshole children. T kept her composure and explained to them that everyone on stage or on TV is wearing make up, even the men. I might have been there to help explain things, but I was not allowed. 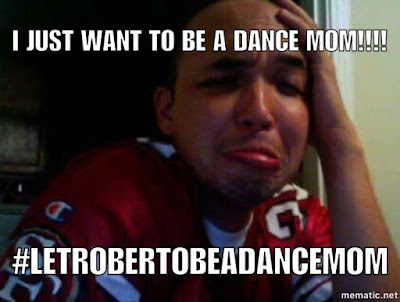 #LetBertoBeADanceMom was a short lived internet non-phenomenon that completely failed to go viral. About a month before the recital the parents were called into the studio at the end of class to film the kids doing their routines so they could practice at home. At the end the teacher asked for volunteers to be "Dance Moms" during the recital and dress rehearsal. "We need to two moms from each class." After 30 seconds of silence with no volunteers I stepped up. "Hey," I thought to myself, "I spent most of my life doing theater and dance. I can do makeup. I can help with costume adjustments. I'm perfect for this.

Maybe you're thinking that thirty seconds isn't a long time. Trust me, it's forever. It's so long that during dress rehearsal if a group was 5 seconds late for their entrance cue the director started again until they got it right. Imagine thirty seconds of dead air on the radio. Or try this, the next time someone asks you a question, just look at them silently for thirty seconds before you answer. Or the next time you answer the phone, don't say hello for thirty seconds. Seriously, it's enough time that if it sits that long after a teacher asks for volunteers, it's clear that no one wants to do it. "What's involved?" I asked. Silence. "Like, what times do we have to be there?" The teacher finally replied that it was just the regular listed times. "OK, I can do it." Silence.

I was stunned. I didn't even think to ask why, I just stood there dumbfounded and uncomfortable. After another thirty seconds a couple moms complained that volunteering would mean missing their kids' performances. It was only after they were assured that they would be able to watch from the audience that two women stepped up.

None of the other parents seemed to think this was odd. The reactions to my complaints on social media were mixed. A few dads thought I should sue. Most people jumped on the idea that other parents, and the kids themselves would feel uncomfortable with a man back stage helping so many little girls change clothes. I get that. But that's not the situation.

All the dancers were instructed to arrive at the venue in full costume and makeup. The little kids were each in one dance, and did not have any changing to do. There were older girls who were in multiple dances and did change costumes, but they were in a different room than the little kids, who were also in different rooms than each other in many cases. (Buddy's class had a room to themselves.) There was no chance I would have seen anything improper or uncomfortable. But no, I can't help.

But I digress, back to the costume debacle that acted as a metaphor for the entire dance school's approach to having a boy in their midst.

At the dress rehearsal T finished Buddy's makeup and left the backstage area before his costume arrived. While she was getting the kids situated in the mysterious land where dads dare not tread, I was investigating the costume situation. I was assured that it was "being Ubered over right now." Seriously? After eight months of class they had to get a costume Ubered over on the day of the dress rehearsal? Ridiculous.  I know what you're thinking, "Dude, it takes a while to get a custom made Durham Bull costume that emits smoke from the nostrils and has all those neon lights." And you'd be right, but that's not what the costume was. We waited anxiously for Buddy to come out. We took bets on whether he'd have a costume on or not.

It was Push. When his group came out, during the only chance we'd have to take photos, he was wearing a shimmery black dance dress shirt, a bedazzled bright pink tie, and the shorts he'd been wearing when we arrived. Oh, and the nude tap shoes. 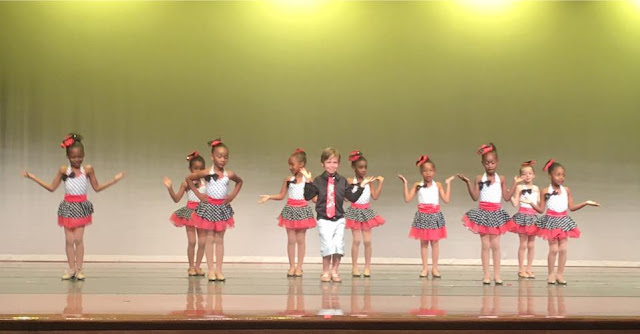 When I went back stage to pick him up after rehearsal I was handed $40, presumably for him only getting half a costume. We were asked to provide out own black pants. When I brought up my frustrations with his teacher she gave me a blank look, the kind teenagers give their least favorite family members during dinner, like she was waiting for me to stop talking so she could leave.


"It's been very frustrating that Buddy has been treated like a complete afterthought all year. It's like you're completely unprepared to have a boy in your class. You've had eight months to get him a costume and then the day comes, and he doesn't have pants. How does that happen?

"Well," she replied dryly, "it is very unusual."

UNUSUAL? It was difficult for me to hold in my fury. If this were a girl in a traditionally male activity being treated this way it would be a local news item. There would be outrage. But I wasn't done. With all the strict clothing instructions they'd given us, hair ties must match the hair color, pins must be done just so, etc. how could they not understand enough about mens' fashion that they had him in nude shoes?


"Also, you're telling us we have provide black pants. Didn't you know that weeks ago? Why not tell us? Also, why did make him buy nude shoes? He's wearing a black shirt and black pants. He's going to wear black tights underneath. Why nude shoes? no man wears nude shoes with black."

"All the dancers are wearing nude shoes."

"ALL THE DANCERS ARE WEARING NUDE TIGHTS! He's wearing black. He already had black shoes. Didn't you think this through even a little?"

"Well he can wear tan or khaki pants."

"With a black shirt and a pink tie? Have you ever met a man anywhere before? No. You were right that he should have black pants, don't come to me with tan pants just to justify your poor idea about the shoes. We're returning the shoes and you're taking them back without complaint."

It's astounding how obtuse people are allowed to be without somehow falling onto train tracks and being run over. So with that my wife went to the thrift store and found and hemmed a pair of size 8 black dress pants.

On the day of the recital Buddy looked great. He danced like a champ. He showed all the qualities of the world class ham that he is. He was jazzed. He had his performer's high. He also maintained that even though he liked dancing, he never wanted to take a dance class again. Rugby season started soon after and he spent the summer running around the field and not asking the girls on his team why they were there. 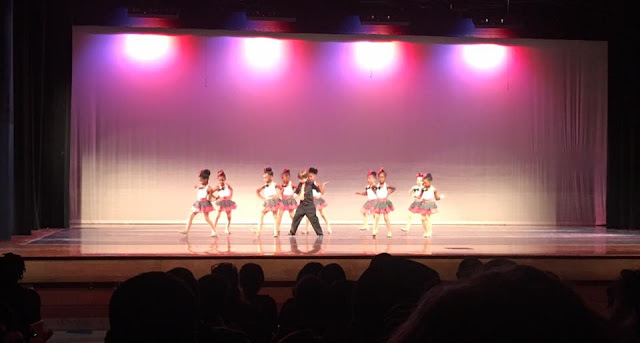