National Men Make Dinner Day happened on November 1st. I'm conflicted. I make dinner roughly half the time at my house, down from 99% of the time back when I was a stay at home dad. So from that angle, I can't fathom that we need such a 1950s Mad Men era holiday.

I can imagine Don Draper doing his Don Draper incredulous squint and saying, "What's next, National Women Go to Work Day?" Then Peggy gives him a scornful look, Pete says something about how his wife would be a disaster in a workplace and only women who can't catch a man end up working, Harry chuckles, Peggy gives a short feminist speech that leaves everyone silent until Don comes around and supports her.

I think I'm off on a tangent.

The other side of this is that it wouldn't exist if it wasn't needed. Even though the country is trending towards men holding up more of their end at home, it looks like many aren't making dinner. So anything that gets guys cooking is probably a good thing. So National Men Make Dinner Day is a thing, and it's not my place to go against the grain of a National Day of things. So, I set about planning on making a dinner. The problem was, I didn't know about National Men Make Dinner Day until a few days after November 1st.

Lucky for me, I was nudged to write something about it anyway. So here we are at the meat of the matter. Making dinner. But what? Something mom used to make? Sure. OK. The thing is, I felt like for this illustrious day dedicated to men who maybe don't cook all that often, I should try something new. I learned how to cook from my abuelita, my step-dad and my mom. So I knew how to make all the primary dishes they made. What could I make that would be a new challenge? 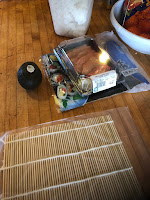 All our plans with family fell through and neither T or I really felt like cooking a whole meal. I've done Thanksgiving dinner before, so I didn't think that was going to get me material. Then T had a great idea, Kidsgiving. The kids would plan the menu and cook the meal (with some guidance from the adults). The kids gave me the master stroke, they decided that for Thanksgiving, they wanted to make sushi. I was in. I've never made sushi. I'm Japanese. Mom made sushi. Grandma made sushi. I never made it. Sushi. For Thanksgiving. Let's go. 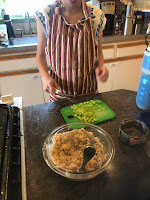 We made a pot of sticky rice the night before and stuck it in the fridge. We picked up some sashimi grade salmon, an avocado, a cucumber and some nori. That's what I wanted. The kids decided to make tuna salad. In a roll. T looked it up, apparently it's a thing they do in Japan. Like how people here will put hot dogs and chili into a tortilla and call it a burrito. T made a test batch the night before. It was...fine. I left the tuna making to Lou, who's a pro at tuna.

I've never used a sushi roller before. I have made burritos. So like, I'm all set, right? No. But there are similarities.

There are two main styles we wanted to try to replicate. They have real Japanese names (Uramaki and Futomaki) but we called them rice on the outside and rice on the inside. We made one of each style for each filling. I'll go through some of the steps below, but I will tell you this isn't a recipe or guide. It's documenting an attempt. 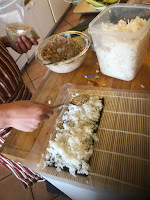 Making rolls is a great way to start learning to make sushi. Let's be real, you're not making it as much ass assembling it. In that way, it is a lot like making burritos. A good burrito is all about making the fillings well and then hoping it all stays inside the tortilla. For sushi rolls, you have to make sure you get the rice right, some vinegar in the rice cooker does the trick. Don't ask me how much, look it up. All I can tell you is, some.

For all rolls, cover your sushi roller with plastic wrap. keep a small bowl of water near by to keep your fingers damp, which helps keep the rice from sticking to you. The plastic wrap can be used to keep your sushi wrapped and for storage if you plan to eat it later rather than right away.

For the filling, we cut the cucumber, avocado and salmon into thins strips. 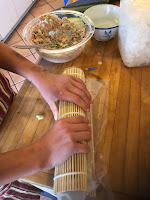 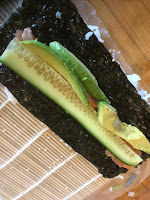 For uramaki (rice on the outside) you use a half sheet of nori. Cover it completely with rice, then add toppings if you want. We put on sesame seeds.

Next you flip over the nori and put in your fillings. Here we have the raw salmon, avocado and cucumber. 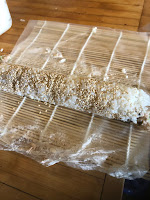 Next comes the rolling, and like the burrito, it's the hardest part. You need to roll it tight and you need to try to get it to stay rolled. We got better over the course of the four rolls, but we never got great at it.

I found that the uramaki keeps its shape the best because you're not relying on the nori to stay rolled up on its own. 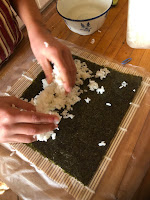 This one was harder to get right. The basics are the same as the uramaki, but without flipping the nori. It's also thicker and more prone to having the filling squish out when you roll it. For the futomaki (rice on the outside), you just put everything down on the same side. Instead of spreading the rice to the edges, you leave about an inch of bare nori at the top. People who have made hand rolled cigarettes will recognize why we're leaving that inch up top. Once all your fillings are in, roll it like you did the uramaki, but you will likely have to pause to make sure you don't roll your bamboo roller into the sushi. That makes the technique a little different. when you reach the last inch, use your water to dampen the nori and seal it up. Our wraps weren't really tight enough and trying to re-roll them made things worse, not better. Still they looked nice on the plate before I cut them. 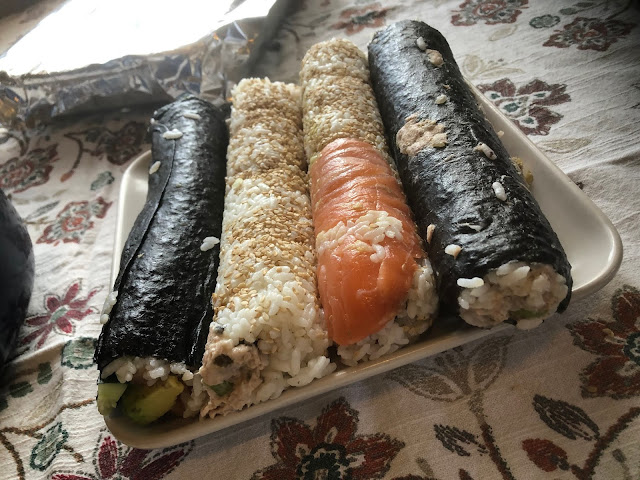 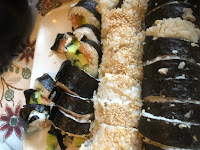 You can see, I tried making one with salmon on the outside like one often sees. It worked out pretty well. Cutting them into slices was tough until I remembered we had been given a sushi knife for Christmas a couple years ago, but had never used it. Having a fresh, sharp knife helped, but the lack of structural integrity of the rolls was clearly evident. They fell apart, especially the futomaki. But they were delicious.

So maybe I didn't make a whole dinner here. It could have been. There was enough to make a meal. This was a side dish for Japanese-American Thanksgiving. My mom, who for many years tried to convince us to BBQ a salmon rather than make turkey, would have been proud. She also would have teased me for not following directions. I'm excited to try it again. So men, get out there and make dinner. 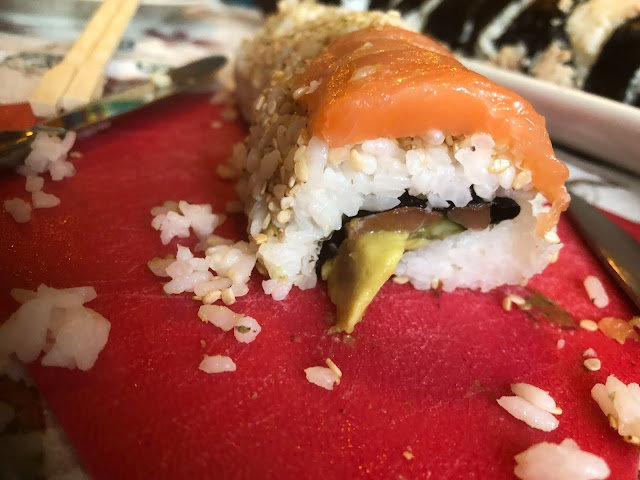 Want to know what National Whatever Day we're celebrating every day? Check out National Today and find something to celebrate every day.
Posted by Berto at 9:57 PM