Social Awareness: How much? How Soon? Too Much? 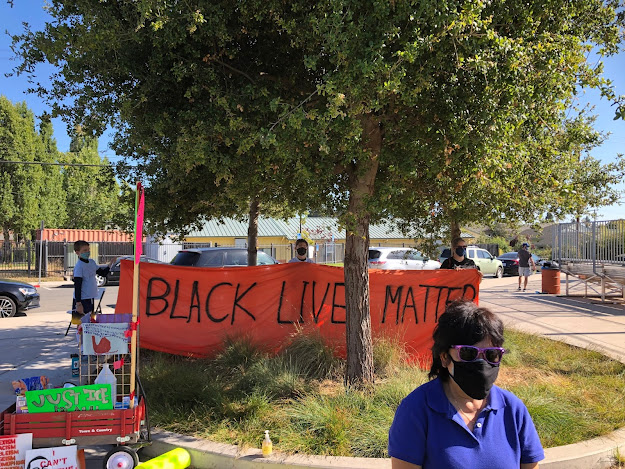 I've been reading through old posts of mine on the topics of social justice and taking action. I grew up going to protests and being politically active. My parents talked to me about the world, or at least that's what I remember. When I was in first grade, my friend and I woke up early one Saturday and hand made as many flyers as we could with a six-year-old's attention span. Then we put 8.5 x 11 "Ronald Reagan Sucks" leaflets in all the mailboxes on our block. As an adult, I would refer to this as "canvassing for Mondale."

When I reached 5th grade, I really was canvassing. I spent two years working on the GE boycott with I.N.F.A.C.T. I spent two years setting up an ironing board, selling buttons, collecting signatures. I even flew out to a GE shareholders meeting in Milwaukee for a direct action. I spoke to the city council about making Oakland a nuclear free zone. I joined an environmental group that held a lot of meetings and a couple retreats and ended up hosting an arts event for kids in San Francisco, but I'm not sure we did anything for the environment.

By the time I got to high school, I was burnt out on political movements. I became a typical Gen X cynic. I marched against the first Iraq war and Prop 187, but if I'm being honest, I was just happy to be ditching class. Rodney King, OJ, I stayed home. I voted. I kept myself abreast of what was going on in the world, but I didn't get involved outside of going to a couple protests against police brutality in 2002 where I got hit by a rubber bullet and faced down police that charged the crowd on horseback. I'll admit, that felt pretty badass.

When we had kids we half made a decision to not shield them from the world or our lives. The other half is that I think we just can't help ourselves. T and I are not the quiet, reserved, stoic type of people. We talk a lot. Like, a lot. People used to remark that our kids were "so verbal." Well yeah, mom and dad never shut up so they hear a lot of words, and a great many of those words are about politics.
I've always struggled with finding the line between making sure my kids know about the world and about our lives so they won't be surprised by things that happen, and telling them more than their developing minds are ready to process. I don't know what the bigger trauma could be, the shock of having things happen without warning, or the anxiety of knowing too many possibilities.
We took the kids to Obama's second inauguration in 2013. We thought it was an important moment. Buddy was four, Lou was two. Neither of them remember it. The next year, we went to Ferguson. Buddy was five, Lou was three. They don't remember that either. In 2015, it was the Million Moms March in D.C. Each of these included conversations about why we were going, the precipitating events and the desired outcomes. We talked about race. We talked about policing. I taught them the things I had been taught about how to survive encounters with law enforcement, even after I realized that their inherited genetic whiteness would make these lessons moot.

Then came the 2016 election and the beginning of years of having to explain new uncomfortable things to the kids about racism and sexism and homophobia and hate crimes. There were marches for women and pride and detention centers. During this, maybe bolstered by it and our discussions of marriage equality, Lou came out as transgender. If this is the one benefit of over sharing with the kids, it'll all be worth it.

Now it's 2020 and we're in the middle of a pandemic and a period of civil unrest. T is back to taking to the streets every night to protest. Lou is back to making protest signs. Xe has a strong sense of right and wrong and all xe wants in the world is for people to be fair. Xe thirsts for justice, which makes sense as xir survival depends on a just and fair world. So we've talked about George Floyd. Just like we talked about Tamir Rice and Sandra Bland and Trayvon Martin and Philando Castille and so many others. Lou was excited to be able to ride in the Oakland Car Caravan protest. Everything seemed fine until that night. After the kids were in bed, T commented that maybe we've told them too much. She said that Lou and Yo now hated the police and were afraid of them and were afraid for us. They were afraid the police would kill us. They were worried about T going out to protest. Not long after, Lou emerged from xir bedroom unable to sleep, wracked with anxiety over police brutality. A few weeks later, a Black Lives Matter protest passed by the busy cross street near our house. The kids wanted to go down to the corner to hold signs and show support. As the main body of the march drew closer, police officers positioned themselves to block cross traffic ahead of the marchers. They were keeping the marchers safe. When Lou saw the police blocking our street on either side of the route, xe turned pale and started to retreat back to our house. Xe was convinced the police were there to hurt people. 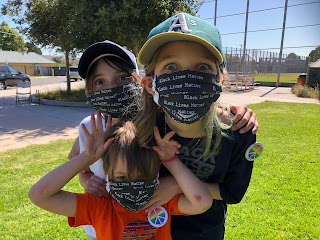 I'm wary of most police officers, but I can't bring myself to hate the police as a whole. I spent the spring of 2017 trying to become a police officer. While I acknowledge the systemic problems of policing as a whole, though I have been a victim of police violence, I just can't hate everyone who wears the uniform. This inability to hate doesn't stop me from being wary of any individual officer. I still do all the things I was taught growing up to make sure I get through police encounters alive. I support Black Lives Matter and I'm terrified of the Thin Blue Line crowd. I also don't want my kids, who by the privilege of their complexions will never need to fear a routine stop, to hate the police or fear them to point where they won't ask for help when they need it. I do want them to understand when to call the police and when to just leave things be. I want them to understand everything that calling the police really means and everything that could result. I don't want them to come to me at 25, seeing an unjust world and telling me, "Daddy, did you even know this stuff happens?" And I would have answer, "Yes." Because if I know then why wouldn't I tell them. If not to keep them safe, then to raise conscious, aware white looking secretly Latino-Asian allies?

It took some convincing, but Lou was persuaded to stay on the corner with us. I wanted xir to understand a couple things. First, that the police were not there to hurt people. Second, that there are things are worth standing up for, even when there's danger. I admit, that's a hard line to figure out. Whether to stand in the face of oppressive force, how much and for how long is dependent on so many factors I couldn't begin to try to explain them. I don't want T or the kids to stubbornly allow themselves to be beaten or gassed or worse. I also want them to start developing a sense for when to stay and when to leave. I want them to recognize danger rather than presume it (or on the other side, presume safety when it isn't real). I want them to be brave without being foolish. I want them to be cautious without being afraid. I want them to understand the world so they're not surprised by it.
The thing I'm still not sure of is how much, how soon?
Posted by Berto at 3:47 PM