The Ref is Called, "Sir" and Other Ways to Avoid Misgendering People

Being misgendered can suck. I only have a tiny amount of firsthand experience with this, but it's been over a long period of time. People often think that I am a woman when I am on the phone. It's been going on my whole life. I used to think it was because I was kid, but it still happens. It's only really bothered me a couple times and it doesn't come close to being something that causes me to produce more than an unseen eye roll before I correct the person. In this way, I am privileged. Since I've never had to wrestle with society failing to accept my gender, being mistaken for a woman doesn't have the same effect on me that it can have for other people.

Assuming a person's gender isn't something I thought much about until a few years ago. For a long time, I was content to go with whatever I picked up from my perception of a person's markers of gender expression. These were cues like hair cuts, clothes and accessories. As I've grown in my understanding of gender and the difference between identity and expression, I know that while they are often linked, expression isn't enough to go on. I saw this with my middle child, who came out as non-binary, but hasn't changed much about their personal style. My oldest, also non-binary, hasn't changed their style much either. Both are often misgendered, but in different ways and with different results.

Most misgendering for my kids comes on the rugby field. Kids play co-ed until middle school, so it's common to have boys and girls and non-binary kids all on teams together. I'll be honest, it can be hard at times to tell who's who. The kids range in age from 7-10 in U10s and from 10-12 in U12 and if you know about kids, you know that the range of sizes and features as kids grow is staggering. Add in the fact that they're all in uniforms and, good luck.  Lou's rugby nickname is "Crash," which removes one more societal marker for gender. Even Lou's real name, being non-anglo and uncommon even for its culture of origin, doesn't provide any help for most people. Lou is sporting a door side-shave that has become a common hair style for people of all genders. So Lou is called a girl about 60/40, and both assumptions are wrong.

Ryu is another story. Being our child, Ryu is very slight of build. Their voice is still child-like, having not yet differentiated. They have grown a beautiful golden mane that they wear in a pony tail when playing or refereeing. When in uniform, this is usually the only typical gender marker that people pick up on. The other thing is that when we ref, we often wear pink, which has become popular for rugby referees in the last decade. I've often had coaches tell me how great it is that my daughter is out officiating games. When I tell them, that's not my daughter, they pivot to how great it is that her parents let her come out with me. 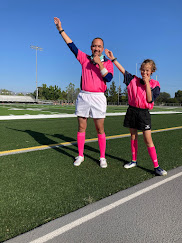 I need to find a better way to express this concept.

This came to a head a couple weeks when Ryu was working the sideline at a game. I was working the opposite line, so I didn't hear anything about it until later. When we got home, Ryu reported that the coaches on the far sideline spent the entire game referring to Ryu as, "sweetheart." Ew. First off, don't call anyone you're not already in some kind of relationship with, sweetheart. Gross. Second, don't use a diminutive when talking to a match official. Especially a kid and especially if you think they're a girl. I know it may be hard to have to refer to a child in a way that defer's to their authority over you based on the position they have taken in the match, but you still have to do it. Thirdly, don't assume someone's gender. Finally, rugby has already set up a way to avoid this, the referee is called, "sir."

The term, sir is use to address all match officials in the sport. It doesn't matter their age. It doesn't matter their gender. It doesn't matter if they are in the middle of the field or on the sideline. The referee is called, sir. This idea is so ingrained in rugby culture that in parts of the mid-west the word is used not only as a title, but as a noun and a verb. As in, "Are you the sir?" and "Are you sirring for us today?" It essentially replaces the word "referee" in some dialects. When called, ma'am, female referees will sometimes correct it to, sir. Here's what I sent to the coaching staff:

"I'm writing to follow up on one thing and I hope that it comes across in text as being friendly and gentle, which is how I intend it.

Could you please remind your coaches to refrain from referring to any referee or AR as, "sweetheart?" All match officials, regardless of gender can be addressed as, "sir." I know for sure that there was no offense intended from the staff. I am certain it was an endearment and not an insult. However, we should generally practice not using diminutives with match officials. More specifically because in this case the term used, generally applied to girls, misgendered the AR. The AR wasn't deeply offended, but did feel uncomfortable and didn't feel able to correct the coaches during the match while also attending to their AR duties.

I know that you all have your hearts and minds in the right place, I know you're all top notch. I did want to get us all thinking about how we interact with officials and keeping to the same standards even when the officials are children.
I am always happy to have more conversation about this or any other aspect of officiating. Thank you again for coming down and thank you for all of the energy and effort you've put into helping develop referees this season."

The coaches replied and said everything you'd hope one would say in this situation. As time goes on, hopefully the presence of my kids in the league will help bring awareness and maybe even change habits. The thing is, habits are hard to break, even for those of us who think we're thinking about this stuff. 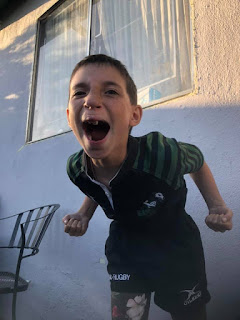 I made a mistake recently that showed me how much work I still need to do. We got a new kid at rugby a couple weeks ago, just coming up to us from U8. Slight build, cool undercut hair style, gender neutral name. The second practice the kid was at, they ended up behind me as I was jogging backward and I bowled them over. Another player asked what happened and I said, "He was behind me and I didn't see him and I knocked him over." That's when the other coach started shout-whispering, "she." It took me couple times to figure out what he was saying. "She. SHE." he shout whispered couple more times. Aw crap, I had just misgendered the new kid in nearly the same way it happens to Lou, and for almost the same reasons. I definitely wanted to dig a hole in the turf and bury myself.

I did what most people do. I took the available evidence and made what I thought was a reasonable assumption based on how I think the world is ordered. Except, I'm supposed to know better. I really thought I was past using my perception of gender expression and context to assume a person's gender. I'm not. Even after having conversations with my kids and my wife about paling everyone, they until you know for sure, I made this mistake. This was even after another embarrassing moment that happened when I was picking up my kids on the last day at transgender kids summer camp. I signed one of the kids out and said to the counselor, who I'd had some rough patches with during the week, "Thanks, man." I was mortified. I sincerely do not know this person's gender and it doesn't even matter what their gender is, this is the one place where I really needed to be more careful. "Hey, I didn't mean, man like...it's...I say it to everyone. I didn't mean..." The counselor cut me off/saved me, "It's cool. I get it." Thanks, kid. You're very kind.

So how can you or I or anyone avoid this? Here are my ideas.

-Use people's names if you don't know their gender. Read through this post again, there are places where I use names instead of other pronouns. It takes practice and can feel awkward, but it's a good trick and useful for when you're still getting used to someone's pronouns.

-If you can't smoothly insert their name, or don't know it, use, "they." Yes, for some people, they is their pronoun and for others it isn't and maybe someone who uses something else will take offense. But I think most people will get your intent, see it as a positive and offer you their pronouns. If singular they seems confusing to you, think of the lost item example to see how you probably already use it: "Hey, someone left their sweatshirt here. We should find out who they are and get it back to them." You don't actually say, "Someone left his or her sweatshirt, we should get it back to him or her."

-Normalize including your pronouns. Even if you're cis, let people know your pronouns. It can function as an invitation for others to also disclose their pronouns and know that they're with someone safe.

-Don't call people, "man." It's reflexive for those of us who grew up wanting to emulate The Fonz, but its time has passed. It's a hard habit to break, but just break it. A lot of people won't care, but I don't want to be the guy who reawakened someone's trauma with an offhand turn of phrase I cold just as well not say.

-Remember that most things you say could be said just as well without a gender tag. "Excuse me, miss." Could just be "Excuse me." "Hello, sweetheart," could just be "Hello." "Your son or daughter," could just be "your child." It's really not hard to just stop talking before you say the gendered part.

Finally, don't let yourself off the hook, but don't beat yourself up. I'm raising these transgender kids, going to workshops, spending time and effort to be the best ally I can be and I still make mistakes. I don't take them lightly. I use each one as an opportunity to remember that I can't be complacent or ever think that I'm done learning and growing. It's OK to be imperfect as long as you keep getting better.

I probably missed somethings here, so please feel free to correct me in the comments or hit me up on Twitter.