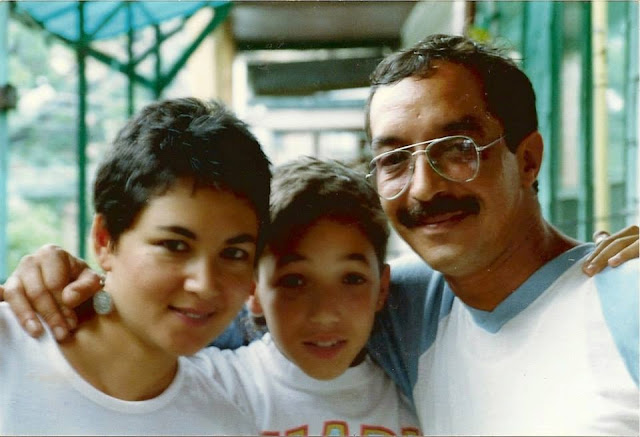 I just watched “Lars and the Real Girl.” I can’t take it. I don’t have the strength. Watching sad movies, or any movie involving death by anything other than car chase or explosion has become too much for me. I can’t get used to the idea of death. I understand it on an intellectual level of course but I can’t get used to in my life. There are people in our lives who we will never see again for a variety of reasons, but for me that makes death even more incomprehensible. I can’t explain why, but even now the idea that I can never see my parents again doesn’t really register. Maybe it’s because I lived so far away for so long that I only miss them every few months or so. But when it comes it comes so strong that I feel like I should be able to pick up my phone and call and I can’t. I can never call them again.

I’m too young for this. I’m too young to have lost them both so close together. I look at my son and I have so many questions. I wonder if I was like that when I was his age and I have no to tell me. I have no one to tell me who I was. Instead I find myself in the opposite position of having to describe them to him. I have to keep them alive for him. Instead of them keeping the little boy Berto alive in their memories and doling him out in little pieces to me and my little branch of the tree, that little boy who was me only exists in me now. And since my mother’s death tore apart the already tenuous bonds between me and her side of the family she really only exists in me now as well. Here I am, burdened with the task of teaching my son who she was and who I was. The truly crippling thing is that I can see her with him as if I’m actually remembering them together. I can see her holding him, fussing over him, telling me how I was just like that or not like that at all. I remember it even though it’s not real.

So I fear death. Not my own death but death of people around me. I think my mother was used to death. Her brother died shortly before I was born. She’d had friends die and grandparents die. In a way it seemed like the lifestyles of the 1970s and 80s took a lot of people away from her. It makes me wonder at what age or after how many occurrences do we get used to death. I’m not used to it. I avoid loving the people around me much as I want to because I don’t know what I would do if they were taken from me. I don’t think I’m strong enough to handle the death of someone to whom I’ve given my whole heart. So I build little walls. I know, it’s a hackneyed metaphor, but it’s what I’ve got. I build little walls by not looking at people unless I have to. I build little walls by being endlessly sarcastic. I build little walls, not high enough or strong enough to isolate me but just enough so that I can bear to lose people if they go.

I’ve built a life on not letting anything destroy me. I know I don’t have real problems. Not in the sense that people who truly have nothing and have no prospects of ever having anything have problems. And I didn’t have a hard childhood like my mother did. And she didn’t have a hard childhood like my grandmother did. And I was better off growing up than my father who came from that group of people who had very little with very little chance of ever getting more. The one thing I had to deal with was notion the that the people you love can leave you at any time. My father left me for years, and even though I understand why, I was never able to forgive him while he was alive. During my somewhat tumultuous adolescence my mother often threatened to cut me out of her life. It seemed like the members of my mother’s family were always ready to write each other off over whatever perceived slight or inequity. As much as they were proud to be associated with each other they never allowed themselves to grow truly close. They never wanted to depend on one another. For most of my childhood I understood that at any moment you could end up completely alone. Up until my mom died I wanted so desperately for her side of the family to show some real unity, for them to stop backbiting and really support each other. After mom died I got a version of that as they all united against me. I still don’t know why they did it, but I know that I lashed out against them with a terrific fury in large part because I was so hurt that they would all turn on me like they did. As a result my walls with everyone else grew a little higher and a little thicker.

My friend Ben used to say he didn’t need any of us. We were a tight knit group from the time we were 14 all the way through adulthood. We fought and made up just like a family, but in contrast to my real family no one ever walked out or even threatened to. Rarely was anyone ever threatened with expulsion from our little tribe and on the couple occasions when it did happen the idea of it was enough to bring the offender in line. Squabbles could last for months but in the end they were always squashed. Ben used to say he didn’t need any of us. He would say we could all die or decide we hated him and it wouldn’t make any difference to him. I couldn’t understand that. I needed those guys, and I wanted to need them. Ben never had to find out whether he was right or not because he hung himself in my stairwell. Instead, we all had to find out how much we needed him.

His philosophy stuck with me. Losing Ben drove home the point that anyone can leave you at any time for any reason. So you isolate yourself so people can’t hurt you and in doing so you create a world where people can’t help you either. Maybe not needing us was the final piece that allowed Ben to take is own life. I don’t think I could ever commit suicide because I know how horribly it would impact all the people who care about me. There’s a lot of them. Still, I can’t stop myself from trying to reach a state where anyone of them could disappear and I could go on.

When my first wife left me I had to be able to go on. She hadn’t died, she’d left. I grieved the loss but instead of the loss of her life it was the loss of our life. The life I had imagined was gone. The kids I thought we would have would never exist. The vacations wouldn’t happen. There wouldn’t be any of it and I had to learn to cope and move on. Looking back I know that my little walls were partly to blame. They were also what allowed me to go on. The same issues with trust and love have threatened my new marriage from time to time. Strength can hurt. Too much strength can cripple you. Look, I know I’m not unveiling any great new truths here. Other people have been saying this for centuries. I do think that until we hear it from the right source t doesn’t sink in. My mother’s strength kept a lot of people at arms length including me. Her strength probably led to her cancer going undiagnosed for over a year. In trying to emulate her strength I appeared dispassionate to her family and they in turn treated me as though her death shouldn’t affect me. I spent so much time making sure nothing could affect me from the outside I rotted from within. I was never destroyed, but I never grew either.

Trying to be too strong leads to carrying burdens alone. We are not alone. None of us are alone. Having a partner means having someone to share your burdens. Not because you’re weak but because they want to help. Accepting help strengthens both of you. The measure of a man isn’t how much you can bear on your own. It’s how much you can do as a part of your community. I’m finally learning that. I’ve been lucky to find another influence.

I didn’t get to know my father’s side of the family until I was an adult. They lived on the east coast so I didn’t see them much until I moved to Washington DC. Even then it wasn’t until my cousin made a real effort to reach out to me over and over again that I really opened myself up to them. My cousin’s efforts to get to know me are endemic of that side of the family. They fuss and squabble just like my mother’s side but the difference is they do it out in the open. They yell at each other, they criticize, they admonish. Then they make up and move on. I remember my aunt telling me that there were times when she told my father to not call, to not visit, to not be around. But she always told him she loved him and never failed to help him out when he needed it. Even when she knew she could never give him money she still gave him clothes and books and mementos. My father’s side of the family embraces the idea that you can have passionate disagreements with family but you can never turn your back on them. This is a stark contrast to the Japanese side who can cast you out without ever telling you why. As an adult I’ve come to identify much more closely with my Puerto Rican side of the family because they give me the one thing I’ve always craved, unconditional love coupled with unconditional honesty. You always know where you stand with them and wherever you stand you always know that they love you.

That’s what I want people to get from me. I want them to know that even when I’m upset I love them. Before that can happen I need to learn to allow myself to love people beyond my ability to recover. I need to be able to give myself to people without fear. My wife deserves more of me than I’ve been able to give her because I’m afraid of hurting too much if she leaves. My son deserves more than I’ve been able to give him because I’m afraid he’ll suffer some accident and die. My friends and family deserve all that I’ve withheld from them because I’ve doubted the permanence of our relationships. I need to give myself permission to love people the way I believe many of them love me.
Posted by Berto at 9:07 AM