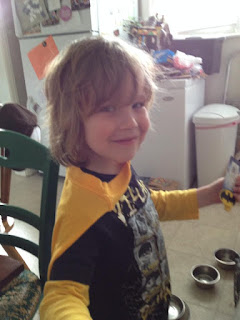 Poor Buddy has dealt with a lot of criticism of his fashion choices in his short life. Sometimes it's been because he's dressed appropriately for a dance class, but some dumb kids and an ignorant teacher don't think he should be taking dance. Sometimes it's been because he likes to try out non-traditional styles, like nail polish or wearing a skirt. One time it was because of me.

When Buddy was in pre-school he had long hair about half the time. Even when it wasn't "long" it was still often longer than other boys at his day care. When he was three and four years old he liked hair ties and barrettes. One of his favorite looks for a time was to do a top ponytail. He looked like a cross between a samurai and a 1980s valley girl. The first time he decided to wear this style to school I was torn between wanting to let him do it, and fearing for what the other kids would say to him. I thought about what to say as my wife drove me to my campus, before taking her and the kids to the base where she worked. As I was getting out of the car, I tried to prep him without telling him not to do it.

"Hey Bud, I think your hair looks great. But there's a chance some other kids won't get it, and they might say something mean. I just want you to be ready for that."

It was a total failure. I could see his face fall as I got out of the car. I knew I'd said the wrong thing. My wife called later to tell me that Buddy had taken the hair tie out as soon as they had started driving. He never wore a ponytail again. I had ruined it.

Luckily, I hadn't ruined him entirely. Over the rest of his pre-school years, he went through phases of wearing skirts off and on, wearing nail polish on all ten digits, and acquiring his own set of barrettes so that he could confidently say, "No. I am not wearing my sister's barrettes." 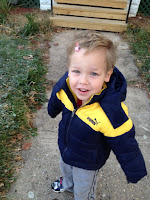 After entering kindergarten his clothing choices became more typical for a boy his age. He does sometimes lament that he can't wear skirts because he doesn't want to have to answer the questions. Since that day in the car, we have always let him do what he wants with his hair. There are times he has to remind me that he wants a haircut because I'm so comfortable with (possibly preferential to) his California boy surfer look when his hair gets long. This year he brought home a letter from school about possible lice exposure in the classroom. The letter suggested that parents check for lice daily for the next two weeks. Buddy wasn't having it. "Dad, can we just shave my head now so I don't have to do all that checking?"  Sure bud, whatever you want. A few days later I rocked a blonde mohawk in support of the Puerto Rican national baseball team's run to the World Baseball Classic championship game. Then I shaved my head to match Buddy. That was in March. 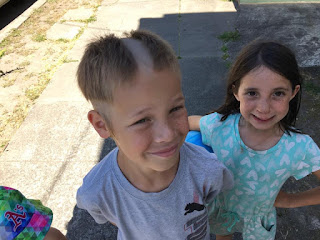 This week is the first week of summer vacation. The kids are home with me since we're all on academic schedules and we're still paying for our move. Camp Dad was the least expensive option and it gives me a chance to relive my SAHD days. We are all very excited. Yesterday I asked Buddy if he wanted a haircut. He asked for three stripes shaved on the top and sides. That was it. I did my best to not bat an eye, though I did pretend to not fully understand so that he'd explain it a few times and confirm that this is really what he wanted. I swallowed my instinctual "They're all going to laugh at you," and went ahead with it, doing my best to at least keep it even.

Later, we went to the playground and the results were predictable. It took about five minutes before a group of older kids (older enough that they should have known better) started in on him. He ran over to me in tears asking to leave. The adult who was in charge of these kids, who were part of some kind of camp at the attached community center, had them come over to apologize. That was good, but I could still hear other kids around a picnic table making comments to each other and looking over at us. I gave them my most stern, disappointed parent look and if you read about me being bullied at computer camp, you can guess that it had absolutely no effect.

As we walked off to a different park I probed Buddy about what he was thinking and feeling. We talked about why kids tease. We drew a comparison to his own behavior with his siblings, and how shutting people down just to feel powerful wasn't the way to live life. We talked about the difference between laughing with and laughing at and agreed that Lou's giggles when she saw him were the fun kind. I asked him if he wanted me to warn him when I thought he was going to make a decision that could result in him being teased. I told him the ponytail story and explained why I was hesitant to offer that kind of advice. He agreed that he didn't want me to offer that kind of warning.

"I want to be better about the teasing next time. I want to be able to just say that this is how I wanted it and then ignore them. I really just want to be me, and do the things I enjoy."

Yeah. That was a way better answer than if he'd answered the question I'd thought I'd asked. I was super proud of him in that moment. He has good teachers. He's finally at a school where he can come to that kind of insight. And I suppose we're not hurting as parents. I was inspired.

Later that night I decided that if he wanted to, we were going to back to that playground together and face those kids again. Together. I went into the bathroom and fired up the clippers.

I'm with you Buddy. Always. 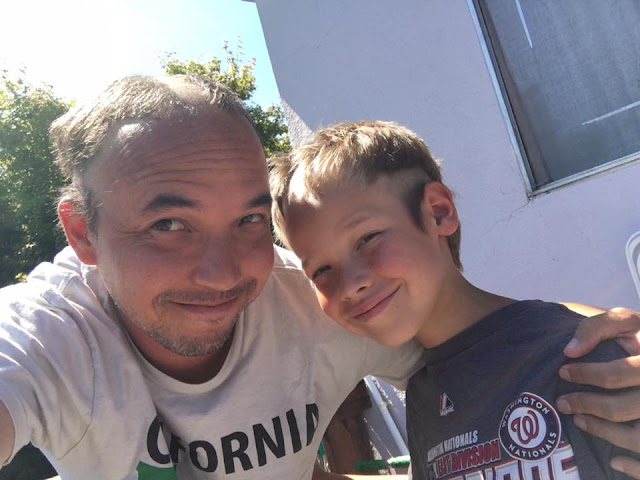